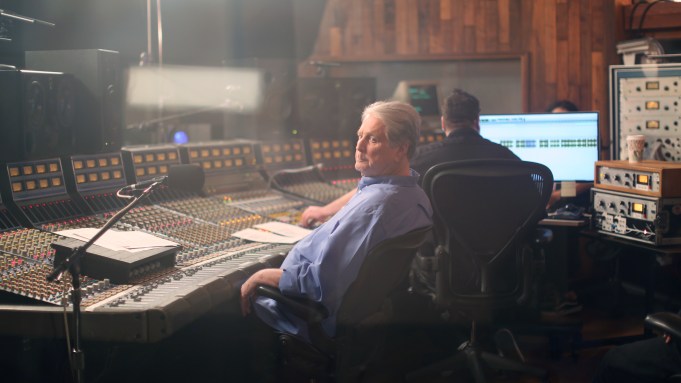 “The idea of doing an interview makes Brian nervous,” says on-camera interviewer and veteran Rolling Stone editor Jason Fine, “so he’ll often ask if we can just take a drive and listen to some music.”

The result is a kind of Carpool Karaoke: Nostalgia Edition, as Wilson visits the spot in Paradise Cove where the Beach Boys’ classic Surfin’ Safari album cover was shot, the location of the now-demolished home in Hawthorne where he and his brothers Carl and Dennis grew up, and his arrival at the Hollywood Bowl as Wilson prepares to perform Pet Sounds live there.

And in case the importance of Wilson’s work is lost on viewers, there are testimonials from fellow Rock Gods Elton John — “Brian just threw away the rule book” — and Bruce Springsteen, who says: “There was no greater world created in rock ‘n’ roll than the Beach Boys. … The level of musicianship — I don’t think anybody’s touched it yet.”

Deadline reported that Brian Wilson: Long Promised Road, which had its world premiere at the Tribeca Film Festival in June, was acquired for distribution by Screen Media for release in theaters and video on demand in November.

The company, according to our own Pete Hammond, also plans an Oscar campaign for the film, hoping to land a nomination for the original song “Right Where I Belong,” written by Wilson and Jim James and recorded specifically for the movie.