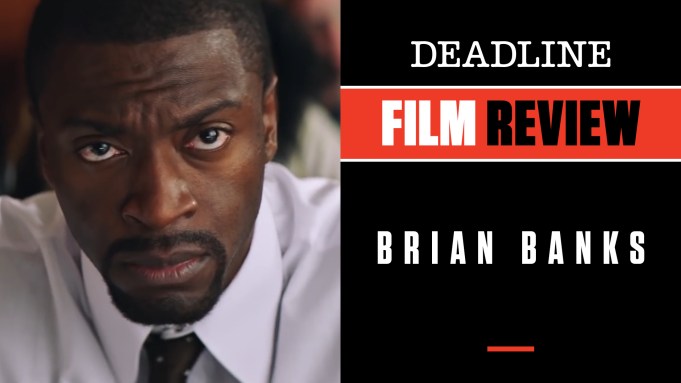 Brian Banks, a remarkable true story of pure determination to defeat an unjust justice system, is an inspiring winner just like the real-life man who is Brian Banks. Here is a movie that gives you hope against all odds and will lift your spirits. It won the Audience Award at the Los Angeles Film Festival last year and then fortunately got distribution through Bleecker Street, which opens the movie right in the heart of summer next week.

Brian (Aldis Hodge in a star-making performance) was a promising football player, headed for a great career, when his life was derailed by a false accusation of rape by a classmate (Xosha Roquemore). It sends him hurtling through the so-called justice system that so many young black men face in this country, his word against the girl and her money-grubbing mother out to exploit the case for all it is worth financially. Some bad advice by his lawyer lands Banks the maximum prison sentence instead of the deal he thought had been made when he was forced to plea in a no-win situation. But he never gives up hope, nor does his mother (Sherri Shepherd), and eventually joins forces with the California Innocence Project in an effort to get exonerated against this gross injustice.

Greg Kinnear winningly plays Justin Brooks, head of the local Innocence Project chapter, who at first is highly reluctant to take on the case, knowing the odds of succeeding are virtually nil. But slowly he and his team have a change of heart after Brian steps up to the plate with reasons why they shouldn’t give up on him. A subplot involves a post-prison Brian, now on probation, starting a new relationship with Karina (Melanie Liburd) as he tries to get his life back together. However, when she hears his story, her own harrowing experience comes rushing back. The film skillfully darts between all of this, ultimately winding up in a courtroom once again, where Brian’s fate will be sealed.

Tom Shadyac seems an unlikely choice for director considering his filmography of wild comedies including Ace Ventura, Bruce Almighty, The Nutty Professor and that ilk, but a life-altering experience saw him taking stock of his own life, leaving directing behind for nearly a decade. He only returned when he found this script by Doug Atchison and the inspiring story of Brian Banks. Shadyac does the film and Brian proud.

It is an interesting time for a film like this to come out, right in the heart of the #MeToo movement — which in most cases, and rightly so, urges us to first and foremost “believe the woman.” Just not this case, which took a lot of twists and turns in uncovering the complicated nature of the truth and bringing one promising man’s life back from the brink. The entire cast, which also includes a welcome brief appearance from Morgan Freeman as the man who mentors Brian in prison, is superb, but it is Hodge who lets loose with a powerful and emotional turn that will stay with you for days. The real Banks now is a motivational speaker, and he served as an executive producer along with Brooks on this film, based on Banks’ book. It’s a story that should be and now has been told. An unforgettable movie not to be missed, and a welcome tonic this summer.

‘Brian Banks’ Trailer: From Teenage Football Star To Wrongly Jailed Felon &amp; All The Way Back

Amy Baer, Monica Levinson and Shivani Rawat are producers. Check out my video review at the link above with scenes from the film. Bleecker Street releases it August 9.

Do you plan to see Brian Banks? Let us know what you think.