Continue to Deadline SKIP AD
You will be redirected back to your article in seconds
Skip to main content
February 11, 2021 3:52pm 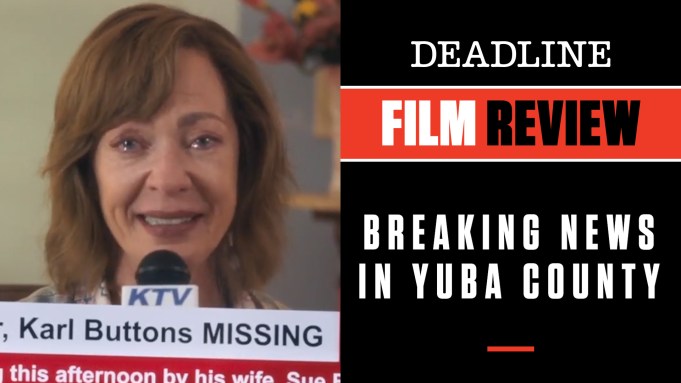 OK, here is the breaking good news about Breaking News in Yuba County: With star Allison Janney as a kind of female “Mr. Cellophane” looking for her 15 minutes of fame, this superb actor is at the top of her game, creating a thoroughly three-dimensional tragicomic figure out of thin material.

Now, here is the breaking bad news: Every other person surrounding Janney — and there are quite a few with recognizable faces popping up everywhere — are strictly of the cartoon variety, a who’s who of over-the-top stock characters that, unlike their lead player, are strictly by the numbers.

The film itself is trying hard to be a new-age black comedy, but along with jarring violence that seems out of touch with an otherwise comedic approach, it misses the boat when it had the bones of being a sharp satire on life in the media age — a need to be seen and heard at any cost in order to validate your own self-worth.

Sue Buttons (Janney) needs to be seen and heard but isn’t, despite her devotion to self-help affirmations of being strong and worthwhile. We meet her on her birthday, but as a colleague is celebrated on the same day she is overlooked not only at work but by her philandering husband Karl (Matthew Modine), who, as she discovers when following him to a seedy motel, is cheating on her with his mistress Leah (Bridget Everett). When Sue barges in and confronts him, he drops dead of a heart attack. Instead of going to the authorities with this news, she decides she can get more attention in her small Southern town — where everyone, including the local talk show queen Gloria Michaels (Juliette Lewis), is obsessed with a missing 13-year-old boy — by declaring that her husband has mysteriously disappeared.

So she gets Leah out of there and singlehandedly manages to bury Karl in a nearby playground. With local reporter Nancy (Mila Kunis) — coincidentally Sue’s half-sister — on the case with the scoop, Sue starts becoming the talk of the town, increasing the gambit by luring Gloria’s interest as well. Meanwhile, the police detective assigned to investigate, Cam Harris (Regina Hall), is skeptical, but no one else seems to be. Things get very complicated when it turns out that crooked banker Karl, thanks to his ex-con brother Petey (Jimmi Simpson), was caught up in a money-laundering scheme by bad-guy bowling alley impresario Mr. Kim (Keong Sim) and has a bag full of cash that Kim’s minions are out to retrieve it no matter what.

Into the picture come his two henchmen, malicious daughter Mina (Awkwafina) and Ray (Clifton Collins Jr), who use brutal methods of intimidation against Petey, a furniture store employee, and his pregnant wife Jonelle (Samira Wiley). Dragged Into that quagmire is his boss, Rita (Wanda Sykes), and her girlfriend, Debbie (Ellen Barkin in a wasted appearance). It all goes on from there, the frenetic plotline building the body count as Sue takes her newfound fame to heart, even as it all careens out of control in slapstick fashion at too many interludes, with usually inspired comic talents like Awkwafina and Sykes being victims in more ways than one.

Director Tate Taylor has done a number of fine films — notably Best Picture Oscar-nominated The Help, the delicious Octavia Spencer horror flick Ma and the excellent James Brown biopic Get on Up with the late, great Chadwick Boseman — and here he shows command of these shenanigans all shot comfortably in Natchez, Mississippi, a part of the country he is very familiar with (even if the film itself is set on the West Coast). But he can’t overcome the one-note feel of Amana Idoko’s screenplay, which, believe it or not, actually was on the prestigious Black List of great unproduced scripts at one time. Maybe it was more coherent on the page. Fortunately, though, Taylor got Janney, who never takes her eye off a woman who is longing for recognition and finally getting it all based on a big lie.

In a week where we are seeing images of the January D.C. riot played out over and over, I am thinking Sue Buttons is the type of misguided personality who might have been swept up in something like that, not an instigator but someone looking for any level of excitement and need in their life to have their voice heard, no matter how wrongheaded. Somewhere buried in this story is the opportunity for a real satirical look at a person scarred by the intersection of the Trumpian media age, where if you say it is true it must be true, and all the consequences therein. That’s not this movie, but with Janney’s fine work the reason to see it, it is sad it otherwise never goes beneath its cartoon surface to say something with more bite about a society that is driving some of us over the edge.

Producers are Franklin Leonard, Jake Gyllenhaal, Riva Marker, John Norris and Taylor. MGM releases it in theaters and digital platforms Friday. Check out my video review with scenes from the film at the link above.

Do you plan to see Breaking News in Yuba County? Let us know what you think.