Continue to Deadline SKIP AD
You will be redirected back to your article in seconds
Skip to main content
October 9, 2019 9:30am 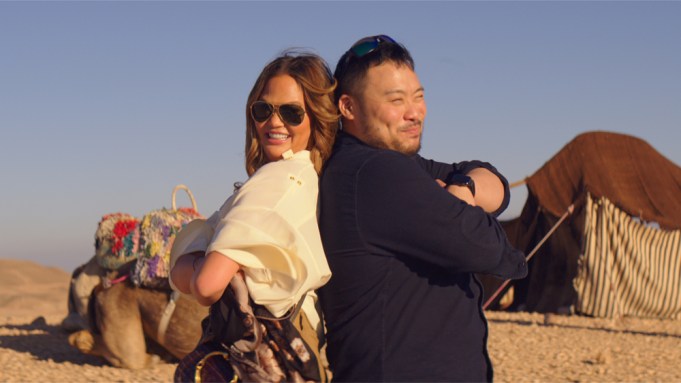 Warning: If you’re hungry and not in a position to sate the situation, you might want to avoid clicking on the photo above. That’s because it links to the trailer for Breakfast, Lunch & Dinner, Netflix’s second docuseries from its Ugly Delicious star David Chang and producer Morgan Neville.

Each of its four episodes features Chang accompanied by a different celebrity guest exploring a single city, its culture and its cuisine. As the pair travels through each city, they also will uncover new and surprising things about themselves. The Season 1 guests are Seth Rogen, Chrissy Teigen, Lena Waithe and Kate McKinnon. Read details below of each episode below.

Here are the cities Breakfast, Lunch & Dinner will visit with each episode’s respective guest:

Seth Rogen, Vancouver
Dave hits his pal Seth Rogen’s hometown of Vancouver, BC, where marijuana is very legal, for a personal tour of Seth’s favorite childhood spots. From dim sum to donuts, they eat their way through town and have close encounters with crabs, octopus, hedge mazes and more.

Chrissy Teigen, Marrakech
Chrissy introduces Dave to her favorite lux Moroccan vacation spot where they explore bustling markets, try their hand at pottery, visit a family home for lunch, and ride camels through the desert. In breaks between fits of laughter, Chrissy prepares Dave for impending fatherhood.

Lena Waithe, Los Angeles
Lena gives Dave a peek into her Los Angeles. They make their way from East to West in a city full of deep pockets of rich subcultures. They start with Lena’s favorite neighborhood breakfast spot and nail salon, then move to Hollywood for crawfish, records and sneaker shopping; and then it’s Dave’s turn to show Lena a slice of her adopted town she didn’t even know existed. Along the way, they discuss everything from professional success to cultural representation.

Kate McKinnon, Phnom Penh
Kate and Dave navigate the rich and complicated history of Cambodia via tuk tuk, helicopter and boat — and eat everything in their path. Deep conversation about creative approach and general happiness is fueled by endless noodles, amok and tropical fruit.