Continue to Deadline SKIP AD
You will be redirected back to your article in seconds
Skip to main content
June 10, 2020 4:10pm 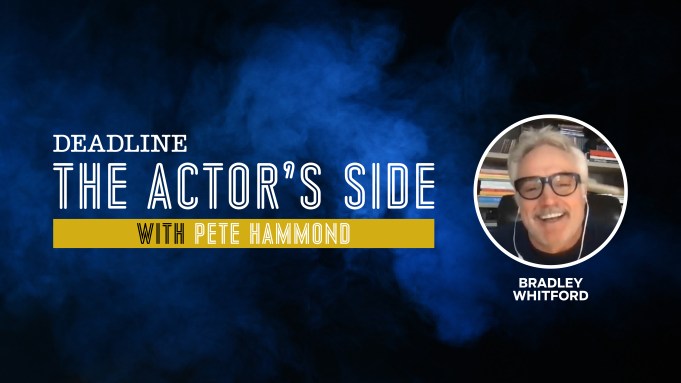 “I always joke that my movie career is basically–I play the guy you don’t want to get laid.” That was just one of a series of observations Bradley Whitford shared with me when he appeared for this week’s episode of my Deadline video series The Actor’s Side. That movie career by the way has been active of late. Recent films in which he has appeared, Get Out and The Post, received Best Picture Oscar nominations, and he wasn’t exactly the guy you root for in either one. He’s faced off against Godzilla too. This year his films include true-life stories The Last Full Measure and Sergio. Upcoming is Lin-Manuel Miranda’s Tick, Tick…Boom!, in which he plays no less than Stephen Sondheim.

But his first love for this Julliard-trained actor was the stage, and as he tells me that once it is in your system, you can’t let it go. However, it is probably television where Whitford has had his greatest success. That is, if you consider winning three Emmys for three different roles a measure of success — and I certainly do. Whitford first won for his role as Josh on The West Wing, and then in a cross-gender role on Transparent, and most recently last year as Guest Star in a Drama Series for The Handmaid’s Tale as the dark and conflicted Commander Joseph Lawrence, which he says is the most fascinating character he has ever gotten to play.

Whitford tells me where he got the inspiration for Lawrence, and also notes that maybe he had a real advantage for that guest-star Emmy as voting was going on just as he became a regular on the series and was heavily featured in new episodes. Nevertheless, he laughs, he was willing to “take it.” We talk about the evolution of his character and the series as it goes forward.

We also talk about the dark corners many of his characters come out of including a recent comedy series Perfect Harmony (just canceled today by NBC), in which he is contemplating suicide in the pilot.

From the first moment in the sixth grade when he discovered the joys of acting, up to right now during a pandemic when he is just itching to get back to it, Whitford is unabashedly dedicated to his profession. To watch him give The Actor’s Side, click on the video above.