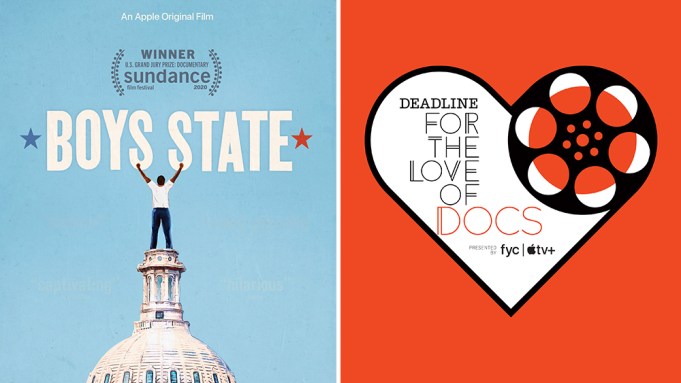 Winner of the U.S. Grand Jury Prize for Documentary at the 2020 Sundance Film Festival, and recently taking Best Political Documentary at the Critics Choice Documentary Awards, the Apple and A24 Films release Boys State came to Deadline’s For the Love of Docs series Tuesday night as I moderated a conversation with filmmakers Amanda McBaine and Jesse Moss. The film chronicles a mini version of democracy in action as the organization called Boys State conducts its weeklong annual convention in which teenage boys basically emulate a big political convention and choose a presidential candidate. It has been going on since the 1930s and has spawned a companion Girls State event that the filmmakers say they would like to tackle in the future. In a highly charged election year, this docu takes on new resonance, as McBaine and Moss explained after our screening — a good thing because as long as it has been around in this country, I had never heard of it before seeing the film.

“The program is kind of hiding in plain sight. It’s been woven deeply into the fabric of American life, both Girls State and Boys State, which we chose to focus on, of course,” Moss said. “Bill Clinton, famously, is an alum of the program. So is Dick Cheney, and so are many, many young people going through it every year. We wanted to have a conversation about polarization in America. I think we are all kind of reckoning with this election we just had, and we see our country is still intractably divided, and when we embarked on this project two years ago we wanted to explore a space in which young people with different politics were getting together and trying to compromise, to find common ground. Is that even possible in America today? That was the question we wanted to ask and explore through the prism of young people in Texas.”

Although the film focused on the Boys State activities in Texas for the purposes of this project, it is a nationwide operation as McBaine explained. “We found out about the program really from an article that we read in mid-2017 that was in the Washington Post, ” she said, “and it was discussing the legislator at that year’s program voted to secede from the union, which in that 80 years that the program has existed had never happened before, and it was sort of a scandal locally in Texas, and then, of course, made national news and that’s how we read about, and so that’s what drew us to Texas. If they voted to secede in 2017, what were they going to do in 2018? And I think either it was going to be Civil War or it was going to be some kind of civil discourse, and I think that what’s going to be interesting for us is we’re going to pursue Girls State next, not probably in Texas, and to see what, in another state, we will find.”

Moss added: “They still keep the programs segregated through the American Legion, which sponsors Boys State and Girls State. I think if they were, hopefully, brought together eventually and they comprised Peoples State. Actually, one of the young men in our film says, ‘What about People’s State?’ and I think we agree that we’re getting to about that time where we should bring boys and girls, young men and women together to make government through this program, but actually, for now, it’s a really fascinated prism into boyhood in America, and I think they’re wrestling with some big questions about what it means to be a young man, how you embody that in your politics. We see all of that play out in our film.”

It can be a very chaotic task try to sort out a story from among hundreds of participants, especially a plot line as it were to get the essence of the experience across in the form of a documentary. “It’s a kind of crazy energy when you get this many young people in a room, and they’re kind of bouncing off the walls,” Moss said, “and we thought, ‘It’s going to be anarchy, right? How can there be order out of chaos?’ But what you see over the week … — we embedded really deeply, we had six crews and we covered the whole drama — is you begin to see a kind of center take shape, and you begin to see a serious debate about politics, about issues. You see serious candidates emerge. You see that the people you don’t expect actually come to power, you know young men who are…young men of color who are politically progressive, they find a way to take power in a space that you wouldn’t think would be receptive to them, and that was probably the biggest surprise. So they start the week debating whether they should ban cargo shorts and pineapple pizza, and by the end of the week, they’re actually finding compromise on gun control, like one of the single most contentious issues. In Texas, of all places, they find compromise, so I think they show us what teenagers what teenagers who believe in democracy can pull off, maybe the adults can, too.”

For McBaine, seeing the reaction of their film across numerous college campuses recently has been enlightening and made it all worthwhile, giving her the kind of hope for the future she felt about the involvement of young people while actually making the movie. “We’ve had a sort of profound couple of months here sharing the film before the election with college students all across the United States, and every single one of those conversations you recognize how invested and how activated this generation is, really, because of what they view as an abdication of leadership in the adult state on issues that for them are existential threats, like climate crisis and gun violence, and all of these other things that because of polarization and deep division in Washington there are just too much in-fighting so not enough happens,” she said. “I think it’s really this film has offered a way to talk about the health of our democracy and electoral politics, and representational democracy, all these things that we need to be talking about without the difficulties of the dark news we get from DC and everything else.”

Boys State is currently available on Apple TV+. Check out video of the conversation at the link above.