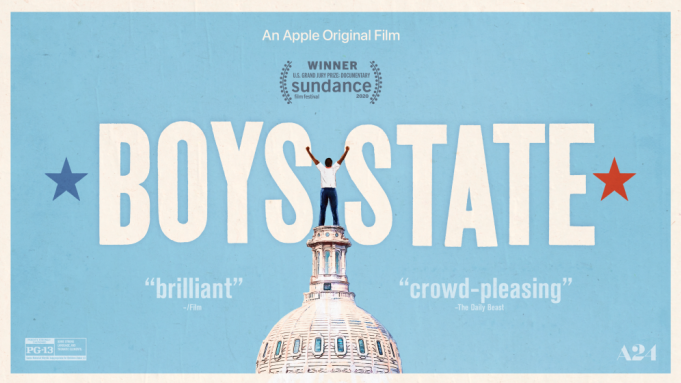 The film, winner of the Grand Jury Prize for U.S. Documentary at the 2020 Sundance Film Festival, goes inside the annual Boys State event in Texas where a thousand high school boys gather for an exercise in mock government. Participants join one of two parties, choose party chairmen, develop platforms and hold an election for governor. Politics at the national level may be broken, in the minds of many people, but at Texas Boys State it appears to function, although it can be bruising.

“It’s not a film of neat and tidy certainties. I think it confronts the complexities of our system through the perspectives of these teenage boys,” says Jesse Moss, who directed the film with Amanda McBaine. “The reason we made the film is trying to understand the politics of America, the divisions in our country.”

The “stars” of the film are four Boys State competitors—Steven Garza, who runs for governor; fellow gubernatorial candidate Robert MacDougall, and Ben Feinstein and René Otero, chairs of the rival political parties. Overall, high schoolers in the program skew to the right, which created challenges for the left-leaning Otero and Garza.

The characters are complex. Feinstein, for instance, comes off as alternately sympathetic and ruthless. He lost his legs as a small child to a meningitis infection. But in the political arena he takes no prisoners, almost in the mold of a Lee Atwater.

“Ben was someone who, when we met him, said he knew how to make friends and he knew how to make enemies,” Moss notes. “Not many 17-year-olds could probably say that. Clearly a very smart strategist. And I think it is not surprising to find those tactics even at Boys State.”

In this deleted scene, Feinstein coaches his fellow party members on how to approach the looming electoral contests.

Boys State is an Apple TV+ and A24 release, produced by Concordia Studio. Moss and McBaine produced. The executive producers are Concordia Studio’s Davis Guggenheim, Jonathan Silberberg and Nicole Stott.

Watch the deleted scene above.