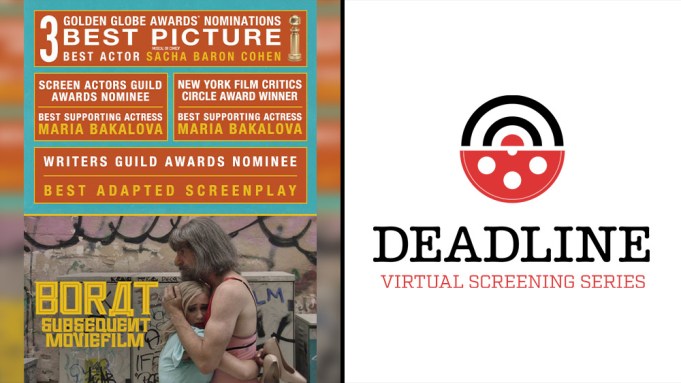 The first time Sacha Baron Cohen turned his character Borat into a 2006 feature film, Borat: Cultural Learnings of America for Make Benefit Glorious Nation of Kazakhstan, the wild comedy won him a Golden Globe, an Oscar nomination for writing, and grossed $262 million worldwide. He never intended to bring him back for a sequel since it is so difficult to pull off this disguise and make it work, but the state of the world, and the 2020 U.S.  Presidential election where he feared Donald Trump could win a second term, changed his mind and gave real urgency to create Borat Subsequent Moviefilm.

For the Amazon Studios release, Baron Cohen is once again up for Golden Globes come Sunday, in Best Picture Comedy/Musical and for Lead Actor and Actress in Comedy/Musical (the latter for Maria Bakalova, who plays his daughter in the movie and has already won a ton of Supporting Actress critics prizes), plus additional nominations at SAG and the Critics Choice Awards. Oscar buzz is palpable.

To discuss the reasons why the time is so ripe for Borat once again, Baron Cohen joined me in conversation this week for an edition of our Deadline Virtual Screening Series, along with Bakalova, director Jason Woliner, co-writer Jena Friedman and producer Monica Levinson. Baron Cohen explained just why he had to make this movie.

“There was always an assumption that it would be impossible to make another Borat,” he said. “When I was making it with Monica the first time around, we just thought it was going to be a little obscure movie. We never thought that a Central Asian journalist who was anti-Semitic would become a worldwide phenomenon, so it was great that it did so well, but so many people saw it we realized we could never do it again with real people.

“We abandoned the idea, and then Donald Trump came along, and like a lot of left-wing liberal Hollywood I was quite angry at what he was doing, and there’s not much you can do if you’re a comedian and an actor, apart from you can either tell everyone what you think or you can do what you do, which is do some work that you feel says something. We realized that Borat was a great way to expose Trump supporters to see how far they would go because Borat was like a more extreme version of Donald Trump. He was a bit more misogynistic, a bit more into caging children, perhaps a little bit less into paying women for sex, but we wanted to show how far they would go, and that really if Trump was elected again you would see a slide into an authoritarian version of American democracy, where we’d be a democracy in name only a bit more like Russia or Turkey.

“So yeah. We wanted to make a hilariously funny film, but that was the aim. We were like, OK, Borat might be the way to do this in a really funny way.”

As you might imagine, trying to direct a film where you only get one take to get a scene right is challenging to say the least, one Woliner met with calm and confidence. “It’s kind of a moving target the whole time,” he said. “Over the course of the year that we were shooting the structure of the script didn’t change. Sacha and the writers had a very clear idea of the father-daughter story, and kind of where it began and where it ended, but we were constantly coming up with new set pieces, and new scenes and things just changed. We’d have a new idea. The CPAC conference for instance we were kind of going down a road of a very different thing, of getting him on stage in a different speech. The ideas just change and change until, I think it was two nights before, we kind of landed on let’s go for Pence. That’s going to be the biggest splash. That’s going to be the biggest moment. How do we do it? How do we get in? We all kind of had to scramble and it was just a lot of that.”

Bakalova, hailing from Bulgaria, won the role after an arduous audition process, and has been overwhelmed at the reception she has received; it certainly took untapped skill for her to pull it off.

“It’s been challenging because the bar was high,” she said. “Sacha is one of a kind, this is his game. He’s been establishing Borat for 20, 25 years, since Ali G. Probably by the year when I’ve been born, and I freaked out in the beginning because he is incredible. He is the funniest person and the smartest person that I’ve met, but he believed in me. All of these people were behind my back and supporting me and they let me develop this multi-layered character, Tutar, together with them by listening to me, what kind of are my instincts and fixing it and making it better, and it’s been just beautiful, incredible. I cannot even imagine that this was really happening, because usually, things like that are not happening to people from my region of the world.”

Friedman, one of several writers on the team that put this all on the page first, and now has been nominated for a WGA Award for Adapted Screenplay, described what it is like to be in a writers room with Baron Cohen.

“I mean, it all starts with Sacha, and I have probably never been in a writers room that has been so supportive and open to just taking an idea and just exploring it, and he brings on the best writers and it’s so much fun for anyone because the freedom, and the creativity. That’s what you see on camera, the kind of fearlessness, but in the writers as well, and then you take an idea to its logical conclusion, and the hard part is because you only have one take and because everybody you’re dealing with has cameras on their phones you kind of have to make sure that as far as you push it you still don’t ever push it to a level where it could get you in trouble. I mean we’re in such a crazy time to make a political comedy, it is just really challenging, and as somebody who had never worked with Sacha and team before it was really cool to see how they navigated doing that,” she said.

Pulling all this off in a normal world is one thing, but these filmmakers also had to do it under the new filming restrictions of making movies in a pandemic. Levinson said it was daunting to be sure. “Literally, every single part of this movie is impossible. There’s nothing that’s easy. You don’t hook it in and say OK, I’ve got this. I mean, it’s just constant. Just the aftermath of Rudy (Giuliani, caught on camera with his pants down as it were) was very difficult and trying, and we didn’t know what was going to happen. He was threatening extortion, which doesn’t make any sense, but it was a federal crime and that meant that that could take precedent over anything in the state, and so we were nervous, and we actually had our crew move that night, in the middle of the night, because we were just worried of what he was going to do. If he was going to round up the team.

“There was just so many things like that, and then shooting in Covid, being the first people out, making sure everybody was safe, and then trying to deliver the movie with five weeks of an edit and even screening the movie in New Zealand to get an audience reaction,”  she said about the crazy schedule they endured to get this out in time to have an impact on the election.

To watch portions of my conversation with Baron Cohen and the team from Borat Subsequent Moviefilm, check out the video above.