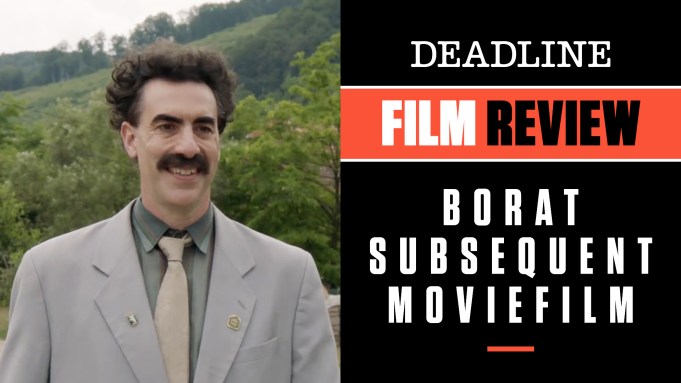 So Borat is back and, in my opinion, that is a very good thing indeed. Borat Subsequent Moviefilm: Delivery of Prodigious Bribe to American Regime For Make Benefit Once Glorious Nation of Kazakhstan is even wilder than the 2006 original, which won star Sacha Baron Cohen a Golden Globe as well as an Oscar nomination for Original Screenplay. Outrageous and hilarious with some scenes guaranteed to drop your jaw and then some, this all just continues to offer proof that Baron Cohen is a comic genius (and a very brave one), a new-age Peter Sellers capable of anything for laughs, underlined with sharp political satire unafraid to go too far.

The 2006 introduction to the character, Borat: Cultural Learnings of America For Make Benefit Glorious Nation of Kazakhstan, took no political prisoners with its no-holds-barred pranks on real-life subjects and blessedly non-PC attitude exhibiting a willingness to offend just about anyone.  This long-awaited follow-up, shot in complete secrecy during the COVID-19 pandemic (a subject it embraces along with a whole lot more), has this election season in sight and takes on a number of targets, most notably Donald Trump himself, Vice President Mike Pence, and especially former New York mayor and Trump personal lawyer Rudy Giuliani caught (almost) with his pants down in a hotel room sequence that has to be seen to be believed. Classic Borat to be sure, and definitely one bound to be talked about in the days leading up to November 3. Baron Cohen was bound and determined to drop this Borat on Amazon Prime Video just before the election, and it is no spoiler to say one of the very last images on screen simply says “VOTE.”

The plot this time has Borat on a mission to America, sent there by the president of Kazakhstan who is upset because President Trump seems to cozy up to every dictator but him. He sends Borat to the States with the idea of delivering an important monkey as a “gift” to Trump to warm up the relationship. When the crate with the monkey arrives, Borat meets it only to discover the monkey did not survive, apparently eaten by his daughter Tutar (a really terrific comic debut by Maria Bakalova), a disheveled, extremely naive mess who was determined to accompany Dad to America and stowed away to get there.

Without the intended gift, Borat now decides to make over Tutar as a new gift, planning to get her more realistically close to Trump by delivering her to Pence first. Scenes where she is transformed are a riot including dressing her, meeting with a social media influencer, and getting tips from a debutante coach. All of these people they encounter along the way are real, not actors, and you have to marvel at how these meetings are secretly filmed and why any of the “marks” would ever sign a release form (I am told reliably they did, including Giuliani — but more on him later).

Among the comic highlights are a trip to a bakery where Borat asks the nice older lady to inscribe a birthday cake with the anti-Semitic chant made famous at Charlottesville, VA, and then buys a cupcake with a baby figure on top that leads to a classic comedy bit of misunderstanding at an anti-abortion clinic. The Debutante Ball in Macon, GA, where Borat gives away Tutar, is a keeper with an astounding finish as they waltz to the appropriately titled “Moon Blood Dance.” A centerpiece takes place at this year’s CPAC event, which is initially crashed in the lobby by Borat dressed as a Ku Klux Klan member identifying himself loudly as Trump senior advisor Stephen Miller. Somehow he makes it past security and into a Donald Trump fat suit and makeover (the prosthetic makeup job said to take five hours as he hid out in the men’s room), carrying the girl on his shoulder as he disrupts Pence’s speech, stopping the stunned VP right in his tracks before being escorted out in a hurry.

The plan to deliver Tutar to Pence now failing, a new target becomes Giuliani, but first a visit to a plastic surgeon since Borat read that Rudy likes “big boobed” women best. There is also a remarkable encounter with a couple of conspiracy theory-spouting Trump supporters named Jerry and Jim who somehow agree to let him stay over at their place, and then take him to an extreme right-wing concert where he hits the stage in country garb leading the gun-toting crowd in a “Wuhan flu” anthem.

Without giving it all away, the big Giuliani finale is a stunner. Rudy is lured to a hotel suite under the guise of doing an interview for a news show with an attractive and very blond reporter (of course, Borat’s partner in grime Tutar). That itself with her questions in broken English are funny enough, but when it progresses to drinks and a trip to the bedroom — before Borat, dressed like a transvestite out of Rocky Horror Picture Show, disrupts the proceedings — it all turns into complete chaos as the pair take off on the streets of New York in their escape. Giuliani, seemingly clueless as to what was happening, commented afterwards at the time that he was pranked by Borat and actually sort of liked the first film. Whether he will like this one after seeing what those cameras captured will be interesting to note. Borat strikes again.

Whatever impact a movie can have is up for debate, but Baron Cohen craftily and fearlessly uses humor to make a point, somehow still able to be a master of disguise as he unveils his targets for exactly who they are. It is moviemaking on a high wire and he pulls it off splendidly and without apology. Jason Woliner was the director. The script is credited to Baron Cohen & Anthony Hines & Dan Swimer & Peter Baynham & Erica Rivinoja & Dan Mazer & Jena Friedman & Lee Kern. Producers are Monica Levinson, Hines and Baron Cohen (I can’t imagine the logistics and planning that went into all this). Amazon begins streaming it on Friday.

Check out my video review above with scenes from the movie. Do you plan to see Borat Subsequent Moviefilm? Let us know what you think.