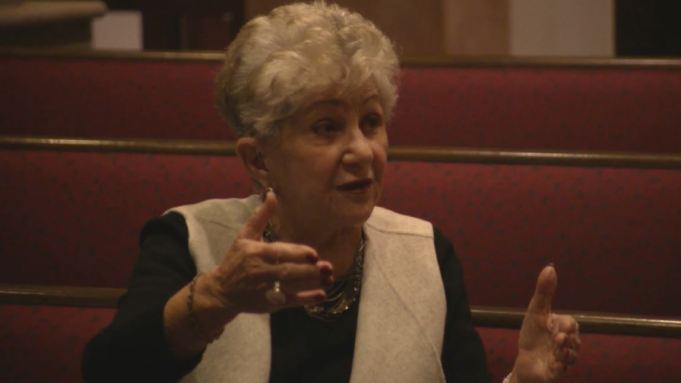 EXCLUSIVE: When the estate of Judith Dim Evans filed a lawsuit charging that the Holocaust survivor was an unwitting participant in a satire making light of the Holocaust, no one was more surprised than Sacha Baron Cohen. Watch Evans’ testimonial in an outtake from the film, in which she gently gave her testimonial to his doltish anti-Semite Borat character. The whole thing moved him enough that Baron Cohen – who is Jewish and whose undercover films expose racism and especially anti-Semitism – that he had his colleagues go back into the synagogue and tell Evans and her friend specifically what he was doing with the film, so they would be okay with it. That lawsuit against Amazon was dismissed this week. Baron Cohen had already dedicated the film to her memory, helped the family establish a website about her, and is still working with Amazon to put Evans’ full testimony on the site as a companion accessory to the film. The synagogue visit was important, I’m told, as Baron Cohen planned to hold Facebook and Twitter accountable for continuing to allow sites that spread Holocaust denial propaganda. That proved unnecessary when both social media platforms did an about face and banned such websites, just before the film premiered last Friday.

As for how well Borat Subsequent Moviefilm did, industry sources tell Deadline that the picture opened bigger than any film ever on Amazon Prime. But despite Amazon’s “tens of millions” of watcher claims, the lack of transparency on viewing figures from streaming sites in general makes it impossible to get specific or even check that boast. What’s inarguable: Borat Subsequent Moviefilm got more headlines than any movie in recent memory and is the rare streaming original film to actually capture a position in zeitgeist usually reserved for TV shows. Its Google searches over the past week rival Star Wars. That’s because of proximity to the elections, the well publicized gripes from President Trump and his lawyer and unwitting film participant Rudy Guiliani, and Amazon’s generous P&A spend. It puts Amazon Studios on the map in a big way, and the streamer spent a tidy sum for that opportunity. Multiple sources said Amazon paid around $80 million, plus P&A for a film that was shot by Universal Pictures in the negative pickup deal formula under which Baron Cohen shoots all his undercover movies, which give him complete control. Sometime during the summer, Baron Cohen came to the studio with his wish that the film come out in the weeks before elections. Theatrical box office was so murky at that moment and Universal was still at odds with theater chains over its Trolls PVOD deal. Baron Cohen wanted the film to be seen by the widest possible audience, so a streaming release instead of a PVOD that required a separate transaction seemed the best option. So the studio let Baron Cohen take it to streamers and a scrum ensued.

I’m told the deal took awhile and streamers saw different versions, because Baron Cohen was shooting right through that time, in a moment when few films were in production because of the pandemic. Deadline broke news of the Amazon deal on September 29, but it is possible that the virtual handshake between Amazon Studios chief Jennifer Salke and Baron Cohen was done weeks before. It has proven a good fit for both, even if Amazon is sticking to its policy and not being transparent about viewing numbers that would validate an exceptional opening weekend. The deal allowed Universal to be repaid its outlay and for Baron Cohen to be compensated in a manner he would have had Universal released the film theatrically in this election corridor, if the whole world hadn’t been turned upside down by the pandemic.