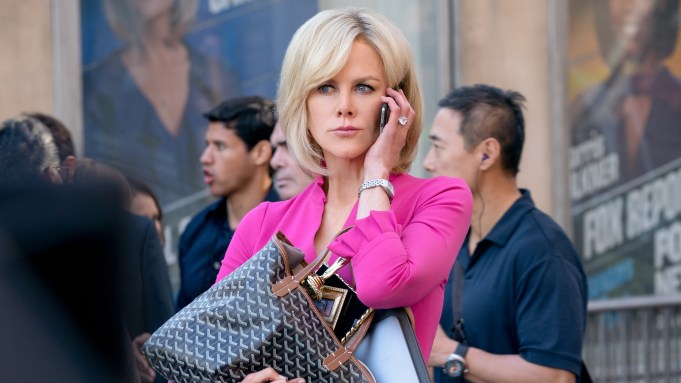 “You have to adopt the mentality of an Irish street cop,” the new woman at Fox News Channel is told. “The world is a bad place, people are lazy morons, minorities are criminals, sex is sick but interesting. Ask yourself, ‘What would scare my grandmother or piss off my grandfather?’ — and that’s a Fox story.”

Here is the new trailer for Bombshell, director Jay Roach’s take on the scandal that brought down FNC founder and ruler Roger Ailes. The clip shows whistleblower Gretchen Carlson (Nicole Kidman) as she tries to convince HR that there is a sexual-harassment problem at the network. “You’re a man-hater,” she’s tells them she’s been told. “Learn to get along with the boys.”

The suits’ response: “Will other women come forward?”

Cut to Megyn Kelly (Charlize Theron) as she addresses her Fox News audience about “the dust-up involving yours truly and presidential contender Donald Trump.” Later when she hears the Donald’s infamous line about “blood coming out of her eyes, blood coming out of her — wherever,” Kelly is aghast. “Did he just accuse me of anger-menstruating?”

Then we meet Ailes (John Lithgow), who informs Kelly, “Nobody stops watching because there’s a conflict — they stop watching when there isn’t one.”

Oscar-winning The Big Short screenwriter Charles Randolph penned the script for the movie from Bron Studios and Theron’s Denver & Delilah Productions. Lionsgate releases Bombshell on December 20. Check out the trailer above and new key art below, and tell us what you think.