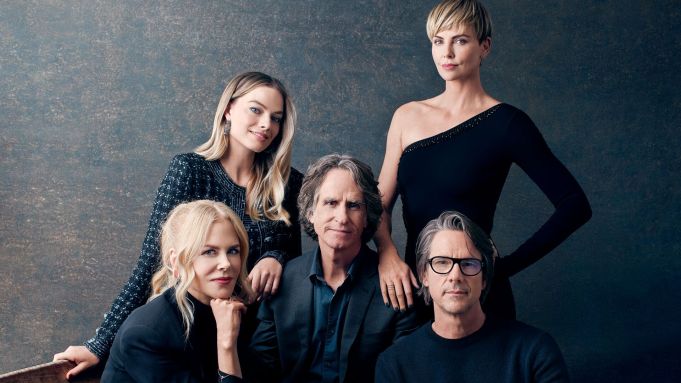 The occasion, in front of a packed house of Oscar voters and key guild members, was to talk about their very powerful upcoming movie, Bombshell, about the scandal at Fox News that saw a group of complex and determined women take down Fox News Channel founder Roger Ailes, who committed unspeakable acts of sexual harassment over many years. Oscar winner Theron, in addition to starring in the film as Megyn Kelly, also is a producer. She describes the role in which she transforms into Kelly in astonishing ways as a challenge, playing a polarizing, conflicted and very well-known personality who was “scary” to undertake.

Kidman said playing the whistleblower, Fox News anchor Gretchen Carlson, was the first time she played a real person whom she didn’t get to meet (Carlson is under a gag order not to talk, a stipulation of her settlement). She said, however, there was an enormous amount of material on her which helped the Oscar-winning star capture her, despite disparity in their appearance. She says Carlson was on fire, a real fighter, but very much felt alone for a long while, thus making her vulnerable and frightened. Oscar nominee Robbie plays the fictional character of Maya and tells how she is representing all the many women at Fox News who signed an NDA who couldn’t come forward to talk about their experiences. She says she wanted to put the audience, both men and women, in her character’s shoes.

Lithgow plays Ailes and praised the script for being alternately disturbing and surprising and important, the situation being a forerunner of the #MeToo movement well before Harvey Weinstein. Oscar winner Randolph said he took on the script because “sexual harassment is bullshit and has to stop.” He talked about the different women he got to write as complex and full of delicious complications. Finally Roach says it was the emotional factor that really got to him, saying he had a real sense of empathy for the characters, and that surprised him. They were the most unlikely women to take on these men, but the simple truth, he said, is that women should feel safe at work.

To watch our conversation, click on the link above.