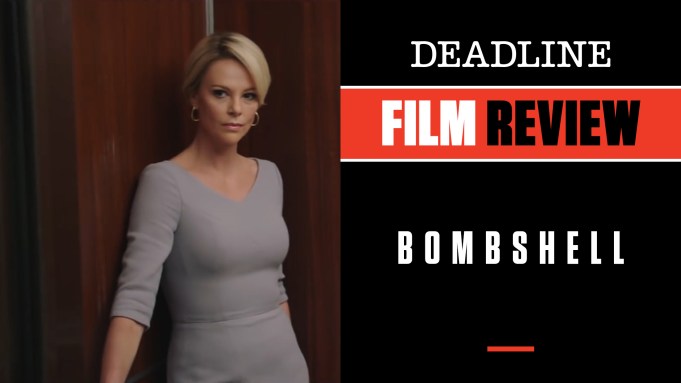 With three blond superstars leading the cast, you could be excused for thinking that a movie called Bombshell might mean something other than a fascinating, pertinent, timely and explosive look at the sexual harassment scandal that took down Fox News guru Roger Ailes. The fact is, in this instance, the term “bombshell” is journalistically appropriate in telling the story of how a group of women working at Fox News, on camera and off, bucked the odds and revealed the dirty little secret behind closed doors that rocked the network.

It was a courageous thing to do, even if it took just one person, on-air talent Gretchen Carlson, to be the first whistleblower in the case — an act, however lonely it was at times, that kicked open the doors to game-changing events and the demise of their boss. And this was all even before the Harvey Weinstein scandal really blew those doors off in the workplace. However the fact that this happened at Fox News, of all places, a shrine to Donald Trump who regularly praised Ailes and behaved as well as the ultimate misogynist, is really remarkable.

But this film written by Oscar winner Charles Randolph (The Big Short) and directed with great style by Jay Roach — who knows his way around this kind of ripped-from-the-headlines topical tale, having helmed the Emmy-winning HBO films Game Change and Recount — is not a partisan call to action but, excuse the term, a fair and balanced account of what happened.

Charlize Theron is remarkable as star anchor and Ailes discovery Megyn Kelly, so immersing herself in the role that when she comes onscreen for the first time, you would swear it was real footage of Kelly herself. Although Kelly was key in moving the company-wide revelations about Ailes and his sexual harassment forward to a bigger canvas when she told of her own sordid experience with Ailes, it was Carlson, played exquisitely by Nicole Kidman, who really took the big risk. To this day, due to her multimillion-dollar settlement, Carlson still is forbidden to discuss the case, but hopefully once the movie opens Fox will loosen up, just like NBC recently did in lifting its NDAs. Add in a third wheel here with Kayla Pospisil, an amalgamation of a number of Fox News staffers forced into sexual situations by Ailes who later signed NDAs in order to settle their cases.

This fictionalized character, heartbreakingly played by Margot Robbie, becomes their voice in the movie. Robbie is at the center of the film’s most disturbing scene when, excited to be ushered into Ailes’ office by his chillingly complicit assistant (nicely played by Holland Taylor) for what she thinks could be a promotion to on-air talent, instead finds herself in the middle of a horror show as Ailes asks her to keep raising her dress in such a debasing fashion that you cringe watching it all play out. To Roach’s credit he doesn’t let the camera wander but keeps it focused on the moment that, to put it politely, is beyond frightening to experience. Robbie is unforgettable, and she already has received Supporting Actress nominations from the Critics’ Choice and Golden Globes for her superb work here, as has Theron, and the acclaim is well-deserved. John Lithgow has one of his best film roles ever s Ailes, giving three dimensions to a monster but making it totally believable that he would have his supporters and could be a brilliant television producer, albeit one with a fatal human flaw.

The rest of the cast is expert right down the line, including Allison Janney as Ailes’ crafty lawyer Susan Estrich, Kate McKinnon (never better), Malcolm McDowell nailing Rupert Murdoch and Connie Britton as Ailes’ wife and partner in grime. Randolph’s script is airtight and complex, giving substance and dimension to a story that has great relevance today as it appears it was just the first in a series of earth-shattering events that have changed the workplace forever and led to the #MeToo movement.

Roach incorporates real footage, marrying it with actors in seamless fashion to the point where the film sometimes feels like a documentary, like we are right there as it all happened. A re-creation of the infamous GOP debate where Kelly challenged Trump on his own past issues with women is brilliantly presented as Trump plays himself and Theron perfectly re-creates the moment, and there is much more than that. This is a remarkable film for our times, as entertaining as it is enlightening and important.

Producers are Theron, Roach, Randolph, A.J. Dix, Aaron L. Gilbert, Robert Graf, Beth Kono, Michelle Graham, and Margaret Riley. Lionsgate opens it in limited play Friday, followed by a wide break later in December. Check out my video review with scenes from the film by clicking the link above.

Do you plan to see Bombshell? Let us know what you think.