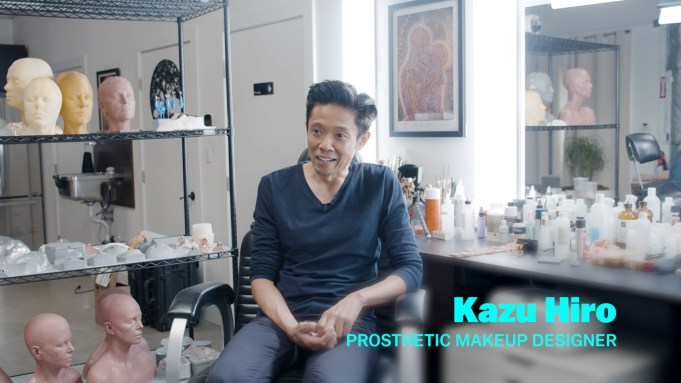 A prosthetic makeup designer who gravitated toward hyperrealistic work early in his career, Kazu Hiro has established himself in recent years as perhaps the greatest artist working in this domain. Stunning the world with his transformation of Gary Oldman into Winston Churchill for Darkest Hour, which earned him his first Oscar, Hiro pushed the boundaries of his craft once again with Bombshell, and swiftly returned as an Oscars front runner.

As every prosthetic makeup designer knows, attempting to recreate the look of real public figures is among the most challenging assignments one can get. When everyone knows the appearance of the person you’re attempting to mirror, there is little room for error in design. And on Bombshell, in comparison to Darkest Hour, Hiro was working with contemporary figures, two of whom are still alive, which could only add to the pressure of the job.

“It’s really nerve-wracking, and especially working with such well-known actors, the responsibility is huge. So, there were times where I’d just suddenly wake up [in the middle of the night], because I was thinking too much. But to make something work, you have to keep pushing it every day, until you don’t have any more time,” Hiro tells Deadline, in this week’s installment of the Production Value video series. “There’s lots of stress, but that’s the process.”

Coming up in the entertainment industry during the 1990s, at a time when pre-production on a film could stretch out to six months or a year, the designer would have less than two months to perfect his looks for Kelly, Carlson and Ailes.

Brought onto Bombshell by Theron, who also produced the Lionsgate pic, Hiro’s first meeting on the project was with the actress and director Jay Roach. “We were talking about what kind of makeup they wanted, and the degree of likeness. No matter what I do, there’s no perfect Megyn Kelly that can be put on Charlize, so there had to be some kind of a transformation,” he explains. “Jay thought she didn’t need makeup. But what Charlize told me was, she didn’t want to see herself through the mirror. Charlize wanted it as perfect as possible.”

“Charlize is very realistic, and she doesn’t bullsh*t. She’s really honest; that’s the great thing about her. She knew what she would have to go through, and there have been so many experiences in my life where, once an actor’s on a show with makeup, and they’re required to sit in the chair, they say, ‘No, I’m not going to sit in the chair,’” Hiro adds. “It happens so many times; they don’t get it, how important it is to sit in the chair. But Charlize is really patient.”

On Bombshell, Theron proved most game for the rigors of the prosthetic makeup application process. “John didn’t want to have makeup on, because I think he’d had a bad experience in the past, but Jay wanted to have it,” the designer shares. “But when I was doing a test makeup on him, as soon as the nose was on, he started to see the possibilities, how realistic it can be. So, after that, he didn’t say anything. He was just so excited about everything.”

In pre-production on the film, Hiro’s first step was to gather up as many reference images as he could, scrutinizing the appearance of the film’s three central characters. “After I got a lifecast of the actors, I started to compare them [with their characters]—what the differences are, what makes sense to do as a makeup, or what I shouldn’t be doing—just analyzing everything,” the makeup artist says. “Then, I started to sculpt, and of course I got approval from Jay. It was hard to tell, because at that stage, it’s just clay—it looks like a brown head, with a piece on it. Once we agreed on it, I started to make a mold of each sculpture, and put a skin texture on it.”

Taking Theron, Kidman and Lithgow through the application of an initial test makeup at his Los Angeles studio, Hiro had the chance then to do one final test before the actors went into production.

From the beginning, Theron knew that for a believable transformation into Megyn Kelly, a nose plug would be key. “The obvious difference is that Megyn Kelly’s nostril is much bigger than Charlize’s, so that was the first thing,” Hiro says. “To create the nose plug, I took a cast of the inside of her nose. From that, I made a 3D scan model of the inside shape, changed the shape on the computer, and printed out a nose plug, which has a handle, so that I can pull it in and out with tweezers.”

Additionally, Hiro gave Theron a nose tip (“Because Kelly’s nose is more like a pixie nose”), eyelids (“Because Megyn has a heavy eyelid, and the distance between the eyelash and the eyebrow is much wider”), as well as jaw and chin pieces, to transform her “roundish” face into one that was more square and angular. At this point, the actress was ready for cameras.

To transform Kidman into Carlson, Hiro initially planned to give the actress nose and chin pieces, along with cheeks. “Gretchen Carlson has a rounder face, and Nicole is really skinny, with a longer face. [But] I ended up making just a nose,” the designer shares. “Because Nicole’s nose is so refined, I made a little bit thicker and rounder nose.”

While the designer’s transformation of Theron has gotten much of the attention this award season, he also had a huge job before him, with Roger Ailes. The process with Lithgow started with a six-piece fat suit, of four-time Oscar-winning costume designer Colleen Atwood’s design. “I’ve worked with her many times, and she wanted to design the body suits because she had to make suits that fit to that, anyway,” Hiro says, “and that would be much easier than waiting for me to finish the body suits.”

For the Bombshell team, what was of utmost importance with Lithgow was the amount of time he’d have to spend in the makeup chair. “The first thing I was told by Bob Graf, the producer, was that they didn’t want [him] to have a long makeup session, so I had to design it so it could be applied in a certain amount of time,” Hiro recalls.

While Kelly was approached with the utmost verisimilitude, the look for Ailes ended up being handled a bit differently. “Jay didn’t want to go all the way,” Hiro says. “So, it’s almost like a hybrid of [Lithgow and Ailes].”

“He had a neckpiece, to make that kind of heavy neck, because Roger had almost like a bulldog-ish face, with big cheeks and a big nose, and much bigger earlobes. For younger scenes, he had a lower lip piece, to make fuller lips. Because as people get older, the lips get thinner,” the Oscar winner adds. “The other thing was, I shaved off his hairline, because John has this kind of triangular hairline, but Roger had more like a circle. [Hair Department Head] Anne Morgan refined that by creating a new hairline on him.”

For Hiro, it took quite a lot of time to perfect the looks of each of the Bombshell actors. Both art and science, prosthetic makeup design calls for constant revisions. In interviews this season, Theron has joked that following the first pass on her makeup for the film, she was left looking like a young Glenn Close. “The biggest reason she looked like Glenn Close was because that was the first time I tried the nose plug I made for her, and it was just too big. It’s very important to refine until everything’s good. So, for example, I made like three different versions of the nose plug,” the designer says. “The eyelids were the hardest, because the eyelid is so delicate, and it can affect the actor in the wrong way. So, I think I ended up making like six different versions of it, to get to the final one. Even once we started filming, I kept changing it to make it comfortable for her, and also to make it look right for the camera.”

Ultimately, Hiro developed makeup for Theron and Lithgow that could be applied in about three hours, which would then be applied by Richard Redlefsen on set.

Over the years, the makeup designer has made his misgivings about Hollywood known. Prior to Darkest Hour, he had officially retired from the industry, switching gears to focus on making fine art portraits at his studio, in solitude. In that craft, Hiro has certainly found satisfaction. “But once I finish making it, it ends there. Film is a group effort, and I really enjoy working with great, talented people—especially like I did this time, with Charlize and John and Nicole,” the artist reflects. “That’s really an inspiring process, and a joyful process. When everything works well and comes into one piece, this amazing thing happens. And that will [last] forever, in a way.”

For more from our conversation with Kazu Hiro about his Bombshell designs, click on the video above.