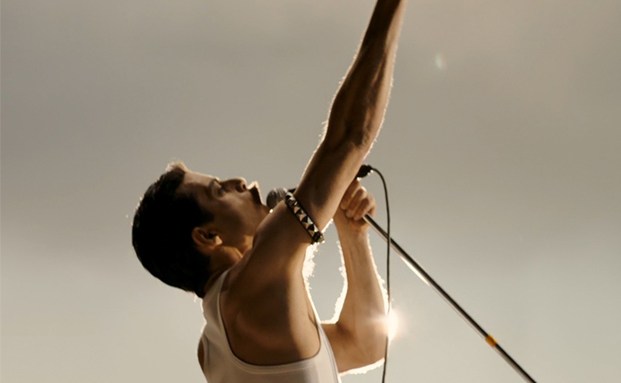 Controversy has swirled around the new movie Bohemian Rhapsody since before it went into production. Sacha Baron Cohen (who was attached to play Freddie Mercury at one time) griped about the authenticity of the script; director Bryan Singer was fired well into the filming; the first trailer was vilified on social media for leaving out Mercury’s homosexuality and AIDS diagnosis, and so on. But as a critic, it is best to review what is up there on the screen, as well as its intentions.

According to producer Graham King, who worked for 10 years to bring the story of the rock band Queen to the screen, it was always planned to be a PG-13 celebration of the glory of their music, even though some earlier drafts of the script did go into darker areas. There are suggestions here, but not big played out scenes in that regard. Gripe all you want about what isn’t in the film (and you can bet the naysayers will do just that), it definitely succeeds on its own terms and, in many ways, is genuinely thrilling to experience. And at its center is a stunning turn by Rami Malek, who brilliantly channels Mercury right down to the pitch perfect lip syncing he does to the actual vocals by the flamboyant superstar lead singer of the iconic band. This soufflé could have fallen without the right actor in this part, and though physically he seems an offbeat choice, Malek turns up and inhabits Mercury in grand style.

As I say in my video review above, this is in many ways a standard showbiz biopic. It doesn’t rewrite the rules of the genre and instead follows a steady course telling of the formation of the band at the beginning of the ’70s, the entrance of Mercury into the group along with all the baggage his complicated personal life brings including bisexual relationships and his AIDS diagnosis, right up to the smashing appearance at 1985’s Live Aid concert at Wembley Stadium, considered one of the greatest rock performances ever. That sequence, coming at the end of the film, is a risky bet as it pretty much lets it play as a mini-concert within the movie and re-creates the excitement and pure thrills of that triumphant show, which marked the reunion of the band after Mercury’s ill-fated solo career burned out.

Most of all what this movie indeed really has going for it is a celebration of the music, and it is here in full force with the impressive catalog including the title song, “We Are the Champions,” “We Will Rock You,” “Crazy Little Thing Called Love,” “Somebody to Love,” “Another One Bites the Dust” and so on, all with original tracks (and in some cases with the help of a sound-alike for Mercury and a bit of Malek himself). It is a movie whose superb sound design demands to be heard and seen in the best theatrical setting possible.

The filmmakers, including director Singer — who shot about 85% of the film before causing the studio to fire him when he wanted to shut down due to family problems — and screenwriters Anthony McCarten (from his story also written by Peter Morgan) have not ignored other aspects of the band’s story, particularly Mercury’s homosexuality, but though that is dealt with, it doesn’t form the center of this buoyant musical tribute. The film does explore Mercury’s early relationship with Mary Austin (Lucy Boynton), their breakup and his admission of bisexuality, his attraction to men and his sometimes-difficult personality, which causes rifts in the band. But other than a surreal and almost Felliniesque press conference where Mercury has a public meltdown, the film is pretty standard in its style and depiction of events, ultimately preferring to keep the main emphasis on the music.

Those band members by the way are nicely played by Gwilym Lee as Brian May, Ben Hardy as Roger Taylor and Joseph Mazzello as John Deacon. All are convincing, as is an Oscar-worthy Malek, in looking and feeling like the real thing. There’s also nice work by Tom Hollander as Jim Beach aka Miami Beach, the man who holds the keys to the Queen kingdom; Aidan Gillan as early manager John Reid; Allan Leech as Paul Prenter; and, in an enlarged but amusing cameo, Mike Myers as Ray Foster, the music honcho who blew it with the group.

Yes, this is a movie completely approved, and even produced in part, by band members and associates, but it doesn’t feel like a con job; rather, it’s a genuine attempt to bring Queen and the legacy of Freddie Mercury to life on the big screen for the one thing that reigned supreme in their dynasty: the music. And what music it is. Credit also should go to Dexter Fletcher, who replaced Singer and shot about 15% of the finished film. He takes an executive producer credit for his efforts. Producers in addition to King are Beach, Taylor, May and Peter Oberth. 20th Century Fox releases it November 2. It had its world premiere tonight in London.

Do you plan to see Bohemian Rhapsody? Let us know what you think.