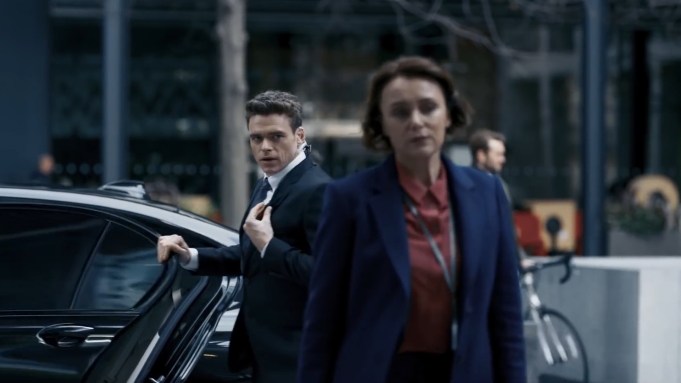 Launching on Netflix tomorrow, Bodyguard comes with the benefit and burden of having been a massive hit over in Britain. Yet, despite the BBC six-parter being watched by an audience of 11 million at its peak on the other side of the Atlantic, the series starring Richard Madden and Keeley Hawes about a potentially very British coup is a stiffly mixed collection of conspiracy clichés. Coming in a week that also sees the Season 6 debut of Showtime’s muscular and now New York City-based Ray Donovan and Sundance TV’s German import of Deutschland 86, Bodyguard’s political-thriller aspirations ended up being pretty thin gruel.

Full of the council estates, seedy establishments, rot at the heart of the establishment and security services that characterize the BritGrit genre, the show finds Game of Thrones vet Madden as a psychologically battered veteran who is suckered and seduced into the latest version of a very traveled UK tale. Foiling a terror plot on a train, Madden’s David Budd becomes a hero and then protector, in more ways than one, to the hawkish and ambitious Home Secretary portrayed by Line of Duty alum Hawes.

Virtually handing you a set of storyline binoculars if you can’t see the plot lines coming down the track, the Jed Mercurio-created Bodyguard finds itself more often than not heading towards the weaker aspects of a Designated Survivor, as I say in my video review above. Which is a shame for a series that has unrealized possibilities to be 24 meets Prime Suspect with a dollop of Norway’s Occupied for a Stateside audience.

Unfortunately, full of filler where there should be thriller, Bodyguard just can’t get the job done, literally or figuratively.

Click on my video review above to see why Bodyguard is not my cup of tea.