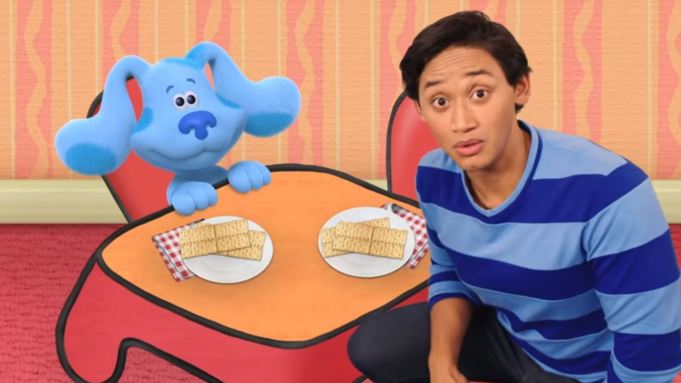 Nickelodeon has set November 11 for the debut of Blue’s Clues & You, its reboot of the popular preschoolers series. Watch the first clip above.

It’s been more than a decade since animated puppy Blue and her live-action human got the young’uns to help interpret clues en route to solving a puzzle. New host Josh (Joshua Dela Cruz) picks up the mantle, complete with two-toned striped shirt. And many of the original toon characters are back: Tickety Tock, Slippery Soap, Shovel, Pail, Cinnamon, Paprika, Felt Friends, Sidetable Drawer, Mailbox and Mr. Salt, Mrs. Pepper — who have a pair of new additions in twins Sage and Ginger.

One new thing is the Handy Dandy Notebook has been upgraded — notebook on one side, phone on the other. So Dela Cruz can call his “cousins” for help solving the first game of Blue’s Clues. Said relations are Steve Burns (Steve), who hosted the original show for its first four seasons (1996-2002), and Donovan Patton (Joe), who manned the Thinking Chair for the series’ final two season that ended in 2006.

So sit back in your own version of the Thinking Chair, have a look at the new teaser clip, and tell us what you think.