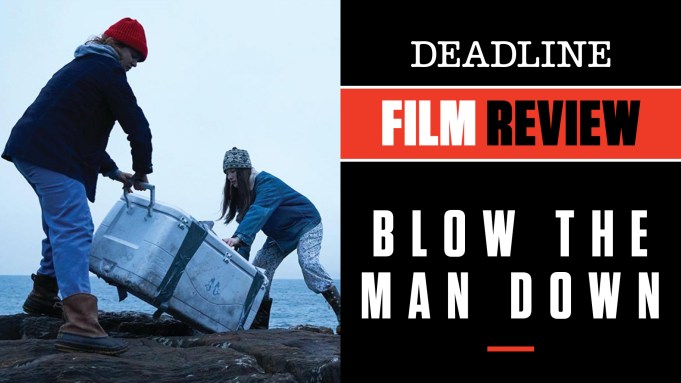 A Best Screenplay winner at last year’s Tribeca Film Festival and an Indie Spirit nominee, Amazon Studios’ deliciously entertaining and witty noir Blow the Man Down clearly is inspired by work of the Coen brothers, particularly Fargo and Blood Simple. The only catch is this one is strictly female-driven and reps the first feature from the writing-directing team of Bridget Savage Cole (who has TV and short-film credits) and Danielle Krudy and stars a bevy of terrific actresses, both new and veterans in a catchy murder mystery set in the small town of Easter Cove, Maine. Make no mistake, this is defiantly not your mother’s Murder, She Wrote episode, and the filmmakers definitely have pledged their allegiance to a Coens-centric style of storytelling. It begins streaming Friday on Amazon Prime and is well worth seeing, especially when you have no excuse to leave the light of your TV set.

Although the pic originally was intended to be seen in theaters, Amazon was prescient to make this strictly available on its SVOD service considering the unforeseen timing. It is a tight 90 minutes of escapist fun, a dark comedy for dark times. Ironically, for such a female-oriented production, it begins with a group of salty old fishermen singing the folk tune “Blow the Man Down,” an amusing title that takes on different levels of meaning as the film sets into gear.

Mary Beth Connolly (Morgan Saylor) and her sister Priscilla (Sophie Lowe) are introduced at their mother’s funeral. This is the excuse the more adventurous Mary Beth has been waiting for as she just wants to get out of this dead-end town and only was staying because of her ill mom. Priscilla, on the other hand, still is grieving and more of a homebody and wants to stay and keep the family’s fish-store business running. That night, however, Mary Beth hits a bar and gets picked up by a guy who turns out to be bad news. Events head downward quickly, and soon she harpoons the guy — this is a fishing village, folks — in grisly fashion right through his neck. Freaking out, she enlists her sister to help her dispose of the body by trying to stuff it in a foot locker that it clearly doesn’t fit into.

That is just the beginning as the act of covering this all up leads to well-kept secrets and practices by a cabal of women who were best friends with mom and run the town — which also includes the local bed & breakfast run by Enid Devlin (Margo Martindale) that really should be called Bed & Brothel because that is what it is. A bloody knife lost by the girls and a big pile of money found by them add to the intrigue as Enid has one and desperately wants the other. When one of Enid’s workers turns up dead in the water, the plot thickens.

What really makes this such a treat is getting to see this group of thesps go for it in every way possible, led by a simply terrific turn from multiple Emmy winner Martindale as the devious Enid. Chalk this one up as another in the pantheon of memorable performances from this great actress. It’s also lots of fun to see vets June Squibb (Oscar nominated for Nebraska), Annette O’Toole and Madeline Hugot slyly make up the cabal of seemingly sweet older ladies who call the shots. Saylor and Lowe are perfectly cast, expertly displaying the terror of finding themselves up to their neck in trouble. There also is fine support from Will Brittain as a police officer on the case who smitten with one of the sisters and Gayle Rankin as an associate of Enid’s. The town itself, and production design, also is a star player in contributing to the overall mood, as is the superb photography from Todd Banhazl.

Drew Houpt and Alex Sharpman are producers, while Ron Yerxa and Albert Berger (Little Miss Sunshine, The Peanut Butter Falcon) are executive producers. Check out my video review at the link above with scenes from the film.

Do you plan to see Blow the Man Down? Let us know what you think.