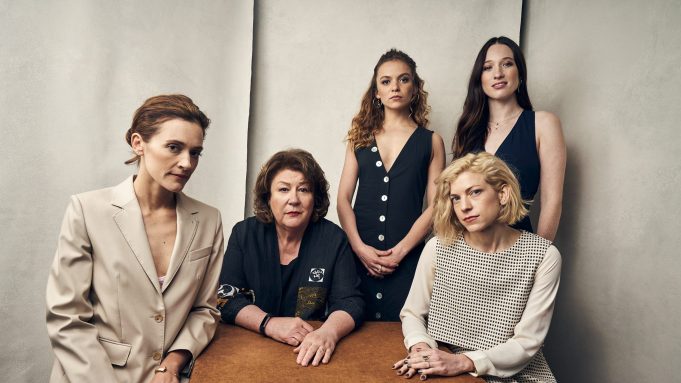 With their first feature, Blow the Man Down, Bridget Savage Cole and Danielle Krudy sought to pay tribute to their mothers, and all the important women in their lives.

Awash with the salty grime of the Maine fishing village where it’s set, the film centers on the Connolly Sisters—Priscilla (Sophie Lowe) and Mary Beth (Morgan Saylor)—who are grieving the loss of their mother, and suddenly find that they have a crime to cover up.

In the process, the pair run into Enid Nora Devlin (Margo Martindale), a local crime boss, and a great character for the actress to sink her teeth into. “My draw was, I love murder,” Martindale deadpanned, sitting down at Deadline’s Tribeca Studio with Cole, Krudy, Saylor and Lowe. “It’s all I read, and when I got to be part of something that had a murder in it, it makes me very happy.”

For Cole, this character presented an opportunity to reflect an important truth, with regard to her own experience growing up. “The people with the biggest powers who could really scare us, a lot of them did not look like people you would normally see in a movie as powerful,” the director shared. “They’re in dainty, quaint kitchens and hair salons, so we wanted to sort of celebrate that.”

Like Martindale, Saylor and Lowe were strongly compelled by their characters, and the unique world in which they existed. Even more powerful, for Saylor, was the story of sisters at the film’s heart—sisters who are close, who have grown up together, and who may be growing apart. “It was something I read maybe three years ago now,” she said of the script, “and immediately fell in love with.”

And while Martindale certainly relished the opportunity to play a role “with some psycho in it,” this film brought much more to the table than that. Centered on a mostly female cast, the film was a testament to the power of women, including women of a certain age. “I’m really driven by powerful, older women, and I think that the more we see of that, the better the world is,” she said. “Women don’t get bad and crippled…Well, they might get crippled, but they don’t lose their power. They only get more powerful, and I think that’s important for young women to see, and for the world to see.”

Also starring Ebon Moss-Bachrach, Annette O’Toole, Gayle Rankin and June Squibb, Blow the Man Down premiered yesterday at the Tribeca Film Festival. For more from our conversation with the pic’s directors and stars, click above.