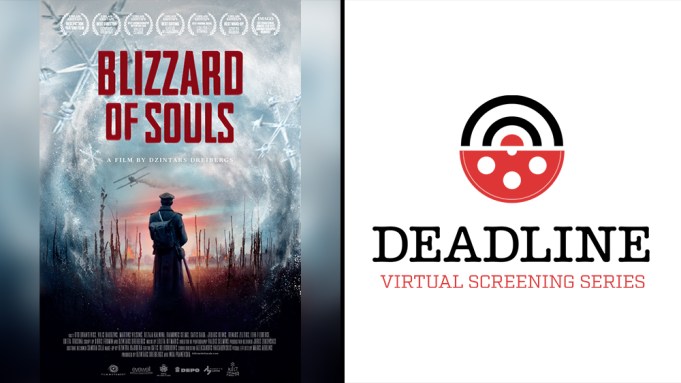 Among the more intriguing entries in this year’s International Feature Oscar race is Latvia’s World War I drama Blizzard of Souls. In light of last year’s Oscar-winning WWI Sam Mendes epic 1917, this is another compelling look at that landmark war that doesn’t get nearly the attention that World War II does from the movie industry. Joining Deadline’s Virtual Screening Series on Monday for a conversation with me on this impressive achievement, made for an astoundingly low $2 million but looking more like 50 times that number, were director Dzintars Dreibergs, lead actor Oto Brantevics, cinematographer Valdis Celmins and composer Lolita Ritmanis.

Blizzard of Souls is the true story, right down to the last details, of a 16-year-old kid named Arthur (Brantevics in his film debut) who decides to go fight in the war, enlisting with his father after his mother is killed — even being that age and legally too young, but “not too young to die” as the ad line says. This is a compelling story, full of action and humanity, and based on the book and the experiences as a Latvian Rifleman by Aleksandrs Grins that was banned in the USSR. Arthur eventually returns to his country and fights for independence.

“The book was forbidden for whole Soviet period. So, of course, only when we regained independence, it was some chance to take it, and to make it, and for me, of course, it’s very important, as director, to find stories which fill some kind of, blank spots, and to tell a story about small country, which becomes battleground, that actually, you can’t escape,” said Dreibergs. “You cannot desert from an army, not be involved in another army, then mobilize, and to tell, from this perspective, how it is to get in this war, how to understand during this war, that maybe the freedom is the only possibility for you to end it, and to get home. It was important for me to tell this very personal story of young men. How to survive this unexpected war, and a need to mature, very fast.”

For the director it was key also to make this film chronologically and to shoot over four seasons. “One reason is, of course, to show the time passing by, and it gives a lot of opportunity for filmmaking too — for example, for the actor, to put him in conditions where it’s minus-17, and you blow winds in his face. It’s really nice to see how a young boy is suffering, in real life,” he said. “With that too, those were the moments, when it got very cold, then it was very hard for us to shoot, but those were actually the most personal moments, because we could really, for one moment, try to associate how those soldiers were feeling, in this moment, because it was really, the same places we are shooting, those battles were happening, and so, it was cold for us, then we understand how imaginable it was for them, laying there for several days, in much worse clothing, without seeing the breaks as we got.”

Dreibergs added another reason for the approach in filming this way. “So, that was, of course, the importance of those many periods, but of course, also, we filmed chronologically. For our main actor, Oto, also to grow up, because this age of 15, until 16, when we were shooting, of course, he matured during the filming process, and also, as a person, outside the shooting, and that was very important for us to see this change in him.”

For Brantevics, who had zero experience on a film set, it was a challenge. “Well, looking at that time, now, of course, I think it was fun, but at the time, I didn’t think like that, because it really was hard work,” he said. “First of all, because I am not an experienced actor. I’m not actor at all, and I didn’t have any idea how the film industry was working. I had some stereotypes from Hollywood, but that was basically it. I had completely no idea what I was doing there,” he laughed. “I just followed my instincts. I just followed somewhat what Dzintars told me, and I tried to find this middle ground, where I can feel that I am doing the right thing, and one thing I knew is that when Dzintars was not complaining, I was doing everything right.”

Celmins had a fairly rigid approach to how it should be shot, a very limited variety of shots for specific reasons, as well as some inspiration from recent movies.

“A very important one was Laszlo Nemes’ Son of Saul which is very, very conceptual, but I really like the amount of imagination it arises in me when I look at this, when I watch this movie,” he said. “So, we loved it, but we wanted to stay more conventional. So, we took some parts of their language. We took something out of American Honey, and we took something out of the book we were working on, and so, we put it together, and we made this language of our own, but basically, it’s a really, really easy language.

Ritmanis is a veteran composer for film and TV, with an Emmy and 10 nominations, but this project was personal for her.

“Sometimes, you know, in life, we come at a crossroads, where all roads intersect at this one point, and this film was that, very much, for me. So, I’m very much the sum of what I’ve done in the past, and what influences I have had in my life, and to get the call from Dzintars to score a movie that is being shot, and that is the essence, really, of the country that my parents came from, was just profoundly moving, and also, to have the gift and terror, I would say, of watching the rough cut, without a temp score, ” she said of a common practice for most directors, who put some previously used music in an early cut to indicate what kind of score they might be thinking about. Ritmanis got to create from scratch.

“So, we could actually have a hundred participants in the score, and I’m very, very excited to share this with my colleagues in Hollywood. Definitely a departure from Batman Beyond, which I won the Emmy for. This has been just an absolute dream, for me.”

Check out part of my conversation with the filmmakers of Blizzard of Souls in the video above.