Continue to Deadline SKIP AD
You will be redirected back to your article in seconds
Skip to main content
February 16, 2021 4:32pm 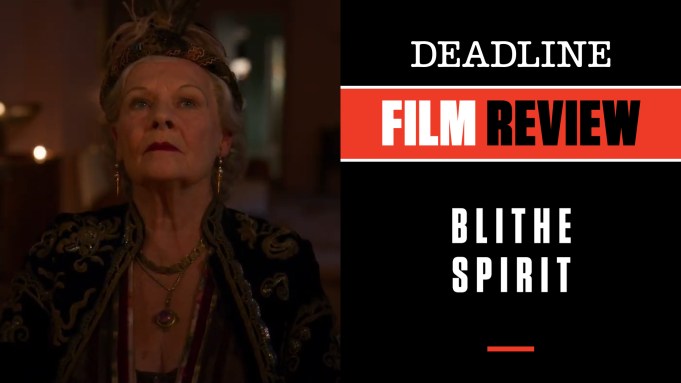 Looking for a few laughs as this endless pandemic drags on? The latest take on Noel Coward’s sophisticated and supremely silly Blithe Spirit provides them. It also presents Dame Judi Dench with a role she was born to play.

If you look it up you will quickly find out that filmmakers have taken a few whacks at Coward’s classic in past decades. In fact I counted eight versions listed on IMDb, and of course that doesn’t begin to imagine the number of times it has been revived on stage — in recent years even winning Angela Lansbury a Tony Award in the role of the chaotic medium Madame Arcati, the colorful medium Dench plays here, who somehow conjures up the ghostly spirit of the first wife of the man at the center of the chaos, a writer’s-blocked playwright-screenwriter named Charles (a nicely manic and frazzled Dan Stevens). The best incarnation remains the great David Lean’s 1945 film with Rex Harrison and Constance Cummings, but director Edward Hall has made sure comparisons aren’t as important here, and his screenwriting team of Nick Moorcroft, Meg Leonard and Piers Ashworth have come up with a more 2021 sensibility to the key characters while keeping it moored in the same era as the original.

The basic bones of the plot are still in place. Charles, in his desperation, summons Arcati to help him in a séance as he is at his wits end, quite literally. Surprising even herself, Arcati manages to inadvertently and unintentionally unleash to ghost of Elvira, Charles’ dead first wife, wonderfully realized here by Leslie Mann. You can imagine her “presence” throws the whole household into a spin, especially when she becomes an unwanted and unseen third party to Charles and his current wife, Ruth (Isla Fisher). Ruth is understandably peeved at Charles’ seeming crazed behavior as he tries to deal with the new ghost in his life, one he has a hard time explaining to those around him. This is the conundrum that sets off the comedic fireworks in this exceptionally amusing, witty enterprise, and the perfectly assembled cast of pros here know exactly how to play the farce for all its worth.

In this version, reworked with the blessing of Coward’s estate, the female characters are given more dimension and independence, and Arcati is expanded to emphasize her backstory and love for her late husband, adding a poignant twist not evident in other versions where she is played more as a wacky psychic with strange ways of going about her profession. Here, Arcati realizes that, however accidentally, if she does have the ability to conjure spirits from beyond, then maybe there is a chance to reconnect with her own very missed significant other. As for Ruth and her reasons for staying with Charles despite suspicions of his mental state, she aspires to a Hollywood career, so with a husband who can write her ticket to movie stardom it is a good trade-off. Fisher is terrific as well, getting all the beats and rhythms of Ruth just right.

Hall, son of the late great British director and theatre maven Sir Peter Hall, keeps this all moving at a pace contemporary audiences wary of British drawing-room comedies will appreciate. He has also worked in strong musical touches with several original tunes that sound like they came roaring right out of the ’30s. Fear not, the integrity of what Coward birthed is all still there, just a little shined up for 2021.

Check out my video review above with scenes from the film. Do you plan to see Blithe Spirit? Let us know what you think.