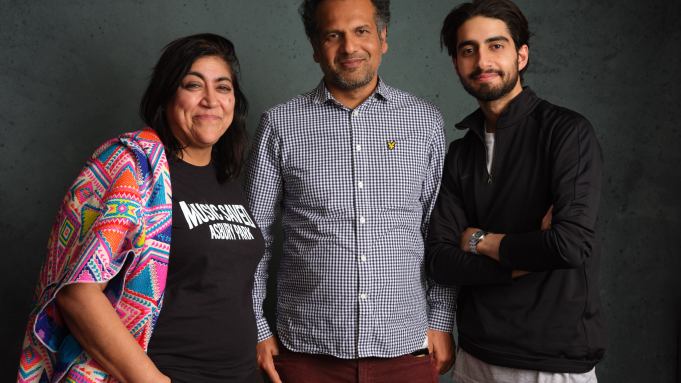 Two years after 9/11, filmmaker Gurinder Chadha released her film Bend it Like Beckham during a divisive time in the world when the perception of South Asians, Muslims, and cultures that were deemed “the other” were under unfair scrutiny. With the film, she welcomed everyone into the lives of a South Asian family to combat that prejudice and with Blinded by the Light, she does it again at even a more divisive time in our world. Chadha went into detail about the inspiration behind the Springsteen-centric film when she visited Deadline’s Sundance Studio along screenwriter Sarfraz Manzoor and star Viveik Kalra.

The film is based on the book by Manzoor, which is a true story about his life as a 16-year-old Pakistani boy obsessed with Bruce Springsteen while living in the town of Luton in Britain. Chadha, who is also a Springsteen fan, said she felt that she knew how to bring the story to the screen in the way Manzoor wanted, marrying his story with the words and songs of Springsteen. She also felt that his story was perfect considering the world’s current social climate.

“It just felt like the right time to make a film that followed the philosophy of Bruce in many ways: life is hard, but you got to find the small moments within it that get you through it,” she says. “And [we’re in] a time when we see a lot of division and a lot of agendas dividing people… out of that, a lot of nasty, ugly prejudice is around. It just felt like this was the right time [to release something that] was the opposite of that.”

The story, which takes place in the blue-collar town of Luton during the ’80s (which Chadha said was recently voted the worst town to live in), follows Javed (Kalra), who really wants to be a writer. His father, who recently lost his job, is against Javed’s career aspirations. When a friend loans Javed some Bruce Springsteen cassettes, his is changed forever. The working-class anthems and affirming lyrics seem to speak directly to Javed, emboldening him to find his own voice as a writer, stand up to the racism around him, and challenge his father’s rigid ideals.

“It’s a universal story,” says Chadha. “It takes a story of family and a character that people often see as ‘the other’ but makes it incredibly accessible, joyous, and makes you feel like you really understand this person and this world even though everything around you is saying ‘no-no, you dont know them’.”

The film premiered at Sundance Sunday and was acquired by Warner Bros. and New Line for $15 million. Watch the interview above.