Continue to Deadline SKIP AD
You will be redirected back to your article in seconds
Skip to main content
January 10, 2019 8:49am
4Comments 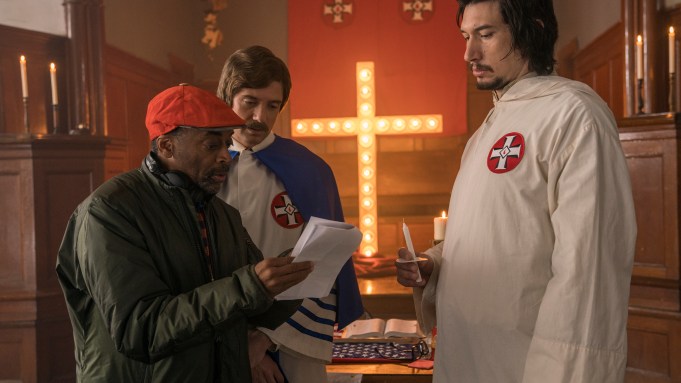 “One of the things I know will happen is that when this guy in the White House, when he’s gone, and historians look back on him, they’re going to look at what he said, his comments about Charlottesville, where he cannot make the distinction between love and hate,” says BlacKkKlansman director Spike Lee of the legacy Donald Trump is set to leave.

Premiering at the Cannes Film Festival last spring and taking home the Grand Prix award, Lee’s Focus Features movie has racked up a plethora of nominations including at the just passed Golden Globes, the upcoming DGA, SAG and WGA awards and the Spirits. With Oscar nominations sets to be revealed January 22, Academy Honorary Award recipient Lee looks very likely to get a first directing nom, with more for the movie too.

Born out of a simple pitch from producer Jordan Peele and based on former police officer Ron Stallworth’s 2014 memoir, the masterful BlacKkKlansman is set in the 1970s in Colorado Springs, CO. John David Washington plays Stallworth, an African-American police officer who successfully infiltrates the Klan. Tracing the trail of hate of decades past to today, the film literally ends up in the present with the horror of far-right rallies and the death of Heather Heyer in Virginia in August 2017.

Lee tracks that tragedy right to Trump at our recent Awardsline screening of the Blumhouse co-produced film.

Check out the video above to see more of my conversation in front of a packed West L.A. theater with Lee and star Washington, and pay attention to what the director has to say about finally getting the legendary Harry Belafonte in one of his films.