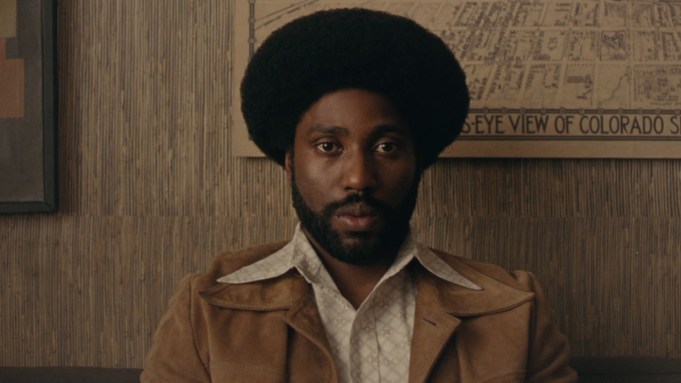 I have to confess that when the Academy awarded Spike Lee an Honorary Oscar awhile back, I thought it also represented the end of his most vital filmmaking years. Recently with mixed reception to films like Chi-Raq, Red Brick Summer, an English-language Old Boy remake, etc., it looked like the days of Do The Right Thing, Malcolm X, 25th Hour, and Inside Man were in the rear view mirror. But now, with BlacKkKlansman, for which he deservedly won the Grand Prize at Cannes, Lee is back with his most urgent, entertaining and pertinent film since Inside Man hit theaters a dozen years ago.

In the meantime, he has done some fine documentaries, and launched Netflix TV series rehashes of glory-years films like She’s Gotta Have It, so he has certainly been busy as ever. But the fire has returned with this one, and coming just two days before the first anniversary of Charlottesville, the timing couldn’t be better. However, as I say in my video review above, don’t expect to get preached to, or even depressed by, this brilliantly observed film that is an actual true story.

Although the subject matter is deadly serious and sadly still relevant to today’s America, BlacKkKlansman often is stingingly funny and satirically on target before punching you in the gut at the end. It is also one of those movies that will have you asking, “Did this really happen?” Yes it did, and Lee has brought the adaptation of Colorado Springs cop Ron Stallworth’s nonfiction book to life, with the help of his co-writers Charlie Wachtel, David Rabinowitz and Kevin Willmott.

The plot revolves around Stallworth (John David Washington), an African American detective, who in the 1970s managed to infiltrate the local Colorado Springs Ku Klux Klan, even going as far as to strike up an unlikely relationship with Grand Wizard David Duke (Topher Grace), who will not be a fan of the film. Answering an ad in the paper, Stallworth poses as a Klan sympathizer and works his way into its world by enlisting reluctant detective Flip Zimmerman (Adam Driver) to pose as him for in-person visits to Klan headquarters and meetings, where soon the pair are able to thwart planned violent attacks. It gets complicated when one of the Klan suspects Zimmerman of being Jewish, which just adds to the problems as Stallworth’s mission proceeds.

Much of this is funny while being sickening at the same time, but the underlying truth of it could not be more of the times, particularly since the advent of Trumpism and last summer’s Charlottesville white supremacist rally that turned horribly tragic — an event underlined with real footage at the end of this pulsatingly prescient movie.

Lee’s ability to be an uncompromising but on-the-money observer of societal ills is used to full effect in this blistering indictment of racism, anti-semitism, and yes, Trumpism (even if this is set some four decades earlier). But he does it in such unexpected ways the audience won’t know what hit them. And let’s hope Lee’s brand of storytelling again strikes a chord and makes a difference. There is no question the times they aren’t a changin’ that much.

Lee’s casting instincts could not be better, starting with a terrific turn from Washington, the son of past Lee collaborator Denzel Washington, as Stallworth, who actually is still living. Grace courageously takes on the role of Duke and does not spare him any small amount of ridicule by just playing him on the straight and narrow (of thought). Driver delivers his usual brand of low-key deadpan acting and hits it on the nail as Zimmerman. Laura Harrier is also fine as head of the Colorado State Black Student Union, a key ally for Stallworth, and there’s a great scene with Corey Hawkins, very powerfully inhabiting civil rights activist Stokely Carmichael.

Producers are Lee, Jason Blum, Jordan Peele, Sean McKittrick, Raymond Mansfield and Shaun Redick. Lee is back at the top of his game, and that is a very good thing. Focus Features opens it Friday.

Do you plan to see BlacKkKlansman? Let us know what you think.