Continue to Deadline SKIP AD
You will be redirected back to your article in seconds
Skip to main content
September 14, 2020 6:54pm 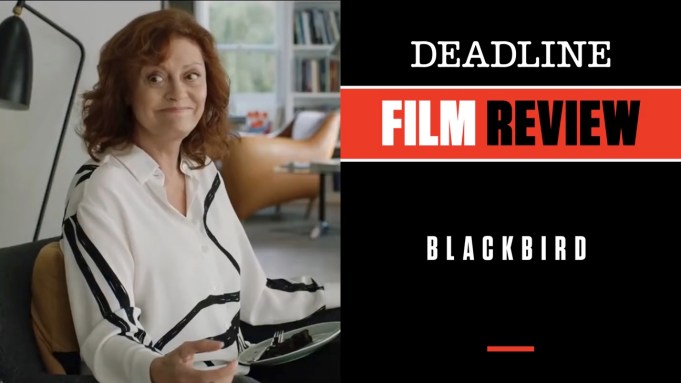 What is so refreshing about the new film Blackbird and sets it apart from other movies about euthanasia is that the debate about the morality of that act is already over before the first frame of the film. In other words, it has already been decided, and agreed to, by all the family members who now are gathering for a final weekend of goodbyes to the matriarch of their family.

In this case that would be Lily, played beautifully by Susan Sarandon, who hits exactly the right grace notes throughout as a wife, mother, friend and grandmother who has been afflicted with a deadly and increasingly debilitating illness (not identified but clearly by the description appears to be ALS). All of her motor skills are beginning to fade away, and she has decided she does not want to live to see herself completely unable to walk, talk, eat or breathe on her own. Thus, her supportive husband Paul (Sam Neill), her daughters Jennifer (Kate Winslet) and Anna (Mia Wasikowska) — the latter with her on-again/off-again partner Chris (Bex Taylor-Klaus) — Jennifer’s husband Michael (Rainn Wilson) and son Jonathan (Anson Boon) and longtime friend Liz (Lindsay Duncan) all gather for this planned last weekend.

Based on the 2014 Danish film, Silent Heart, the movie directed by veteran Roger Michell (Notting Hill, Changing Lanes) and adapted by the writer of the original, Christian Torpe avoids the pitfalls of drifting into pure melodrama and soap opera that some of the twists and turns in the story might have caused in lesser hands. Instead, long-held secrets, newfound objections by one family member and various personality clashes all seem real and acceptable as the layers of this family’s past are peeled away in a bittersweet exit that Lily is bound and determined to carry out on her own schedule and her own terms.

The centerpiece of it all is a Christmas dinner, a final one — even though it isn’t Christmas. What starts as a warm and celebratory event devolves into something else entirely that not only helps give the movie some of its most important key dramatic moments but also will seem instantly relatable to most viewers watching it unfold. In many ways, this material seems ripe to be a stage play, with the gorgeously appointed remotely located picaresque house the center of all its conversations, except for one outing along the nearby shore, but Michell manages to move his camera in and out in ways that keep it firmly cinematic.

The big plus here is a perfectly chosen cast beginning with Sarandon, who seems doggedly determined to keep it real, physically, emotionally and mentally, even in the trying circumstances for Lily. Neill is warm and understanding as Paul, a doctor who has planned the actual act to happen organically and without suspicion in a state that does not support the right to die. Although Winslet’s more controlling sister doesn’t seem to be on the same planet as Wasikowska’s high-wired and vulnerable Anna, the two still play off each other nicely. Taylor-Klaus is terrific in a deceptively challenging role as the outsider trying to fit in without making noise about it, while Boon hits all the right notes as the youngest member of the family, who confides his own ambitions in a poignant conversation with his grandmother.

Wilson as Michael has what could have been an inconsequential role as the son-in-law afraid to assert himself against stronger family members, but the actor makes it his own when given the chance. Veteran Duncan is, as usual, a real plus to the proceedings, even when revelations threaten to sink the whole soufflé. They don’t. Blackbird is about someone trying to keep her dignity intact with a personal choice, controversial to some, that ultimately is hers to face alone. The film surrounding that choice keeps its own dignity intact in a tricky balancing act that is nothing less than beautiful itself.

Screen Media sends it out Friday on VOD. The film had its world premiere at last year’s Toronto Film Festival. Producers are Robert Van Norden, Sherryl Clark, and David Bernardi. Avi Lerner’s Millennium is the production entity. Check out my video review with scenes from the film at the link above.

Do you plan to see Blackbird? Let us know what you think.