Continue to Deadline SKIP AD
You will be redirected back to your article in seconds
Skip to main content
July 6, 2020 12:55pm 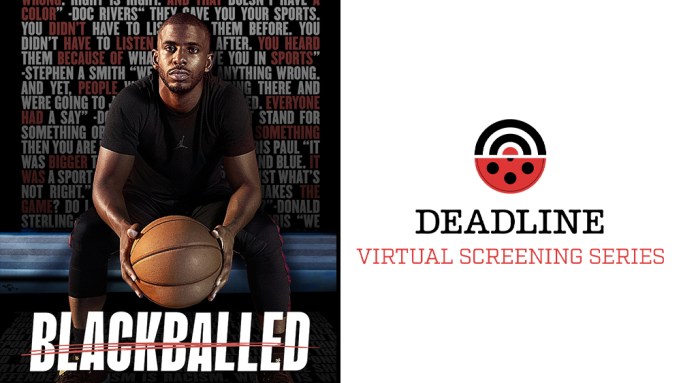 Spring 2014 undoubtedly will be counted as a watershed moment in NBA history. The racial comments that were made public from former Los Angeles Clippers owner Donald Sterling set in motion events that changed the league in unprecedented ways. Now Los Angeles Clippers coach Doc Rivers, along with players including Chris Paul, DeAndre Jordan and JJ Redick as well as NBA commissioner Adam Silver, are giving their accounts on that day and the events that followed in the new Quibi docuseries Blackballed.

“One of the reasons why Blackballed is so important because is we have an opportunity that I hope to be the definitive piece on that time period and what happened,” executive producer Will Packer said during Awardline’s virtual screening of the documentary. “We have now pulled it together and told the story from the coaches and the players and looked at the power structure.”

Highlighting the adverse effects of unchecked power structures within the organization, “If there wasn’t the tape, will Donald Sterling would still be the owner of the Clippers, yeah,” Packer opined. “People knew what he was doing. They knew who he was. It was the worst-kept secret… But the reality is that it took like literal, actual audio evidence.”

‘Blackballed’ Trailer: Quibi’s Inside Story Of Donald Sterling And The L.A. Clippers

As Packer pointed out, it’s the same reality that is prevalent today, especially in the Black community.

“Black people have been saying for generations: ‘This is what happens. This is what we suffer from. This is what goes on. This is the level of oppression,'” said Packer. “Without the camera, without literally 8 minutes, 46 seconds of video, I don’t think this country would have been burning the way that it was. And you wouldn’t have this all-inclusive uprising and finally, everybody’s saying enough.”

Whether it be a docuseries like Blackballed or a Kevin Hart comedy, Packer shared his aspirations to continue to use his position and the power of media to amplify Black stories across various mediums.

“Long before anybody put a knee on George Floyd’s neck or shot Breonna Taylor or Ahmaud Arbery, there was a decision that was made about that person’s value, about the value of their life,” Packer said. “And too often, that value is based on a perception, a preconceived notion of the value of that person, the humanization, the threat that they may present. And a lot of that is about what we see, be it in movies, films, docs, be it on the news, whatever it is, it’s that imagery.

“I think that if we have power, we have to use it right,” he added. “I’m fortunate to be able to tell stories like [Blackballed] and have people consume this because it’s an important story. You need to know what happened and what happened behind the scenes and what it was like during the day.”