Michael Jackson's Nephew Jaafar Jackson To Play King Of Pop In Antoine Fuqua-Directed Biopic
Read the full story
May 7, 2020 7:00am 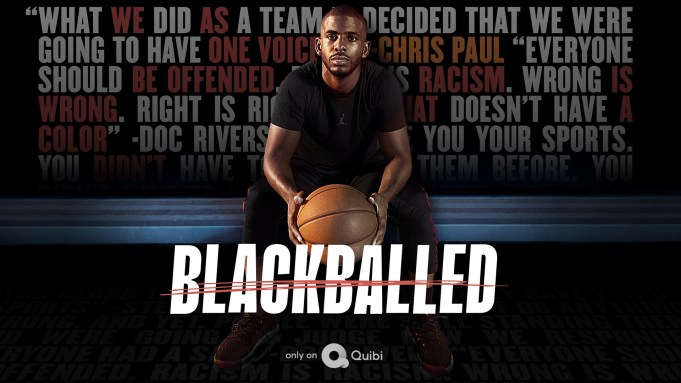 Centered on seismic events in the NBA in the spring of 2014, Blackballed tells a story of race, power and hubris through the eyes of the Los Angeles Clippers’ players and coach.

When a tape surfaced of then-team owner Donald Sterling spewing racial stereotypes, it set in motion events that changed the NBA — and sports — in ways that were once unthinkable.

Now Clippers stars Chris Paul, DeAndre Jordan and JJ Redick, along with coach Doc Rivers and NBA commissioner Adam Silver, explain how over five days during the 2014 NBA playoffs they asserted their power, leading to the most unprecedented punishment in sports history

Coming exclusively to Quibi on Monday, May 18, Blackballed is a powerful documentary series that examines the race in America through the explosive downfall of Clippers owner Donald Sterling.

Blackballed is directed by Michael Jacobs and executive produced by Chris Gary and Ryan Simon, Sam Widdoes and Peter Cambor for District 33, Will Packer and Kelly Smith for Will Packer Media, and James Widdoes.

Quibi is the mobile streaming service launched in April by Jeffrey Katzenberg and Meg Whitman.