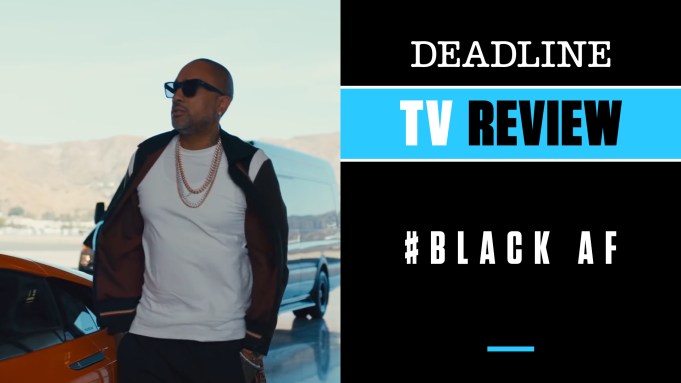 In what may be the first prerequisite comedy of this stay-at-home time, Kenya Barris’ #blackAF is funny AF.

A bit of a self-generated therapy session in motion, the eight-episode meta-sitcom co-starring Rashida Jones and launching April 17 on Netflix is also often extremely self-aware and self-deprecating about cultural codes, the constraints of mobility and its creator, as I say in my video review above.

Full of cameos from the likes of Ava DuVernay, Will Packer, Nia Long, Tim Story, Issa Rae, Tyler Perry and Lena Waithe, the intentionally heavy-handed mock-documentary that profiles Black-ish kingpin Barris as an exaggerated and emotionally hamstring on-camera version of himself may not be the most original idea in the world, but it works just great here. Playing to the strengths and weaknesses of first-time lead Barris’ own acting chops and the never less than excellent Jones, the premise is that Barris’ second-oldest daughter Drea (Iman Benson) is chronicling her train wreck of a household for an NYU Film School application. Setting up the tone and stakes for everything to follow, her dad, now flusher than ever from his big Netflix deal, then jumps in with a well-staffed crew and high production values and the game is on.

Part Modern Family, part The Office, part Larry David’s Curb Your Enthusiasm, part Larry Sanders and a whole lot of the Black-ish franchise with the ball gag of network circumspection removed, #blackAF’s architecture provides the series executive produced by Barris, Jones and Hale Rothstein the foundations to go and do whatever it wants – which is the real innovation here.

The first direct project from the Girls Trip co-writer since inking that multimillion-dollar deal with the streamer in 2018, #blackAF is all Barris almost all the time, I’m telling you now. Yet, with Jones, Benson, Genneya Walton, Scarlet Spencer, Justin Claiborne, Ravi Cabot-Conyers and Richard Gardenhire Jr. as the rest of this almost uniformly self-absorbed brood, this warts, wealth and all depiction goes far deeper than just its barrage of sharp one-liners and rants.

For more of my take on #blackAF, click on my video review above.

Produced by Barris’ Khalabo Ink Society under his overall series deal with Netflix, #blackAF is directed by Barris, Jones, Ken Kwapis and Brennan Shroff. BTW – when you binge #blackAF, as you should, you’ll notice Deadline makes a pointed appearance in one of the opening montages. Nice touch.