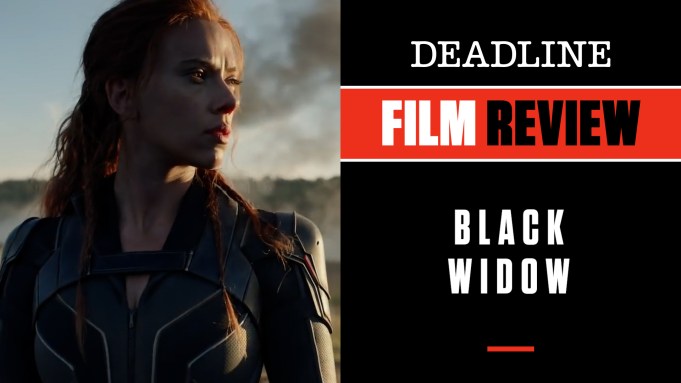 It is not any spoiler to say Black Widow is almost certain to be Scarlett Johansson’s last spin around the track as the title superhero, aka Natasha Romanoff. She has been playing her since the character’s 2010 debut in Iron Man 2, appearing in four Avengers films including paying the ultimate sacrifice in Endgame, and also making her mark in Captain America: The Winter Soldier and Captain America: Civil War. Finally (and following the pandemic delay of the release) she gets her own stand-alone entry in the MCU set right around the end of events in Civil War, and Johansson makes the most of it.

It appears she is truly done with the MCU (at least as Black Widow), and she goes out with all guns blazing as this first film in Phase 4 of the MCU does not stint one bit on the action, giving us some exciting set pieces that ought to satisfy fans. but more importantly focuses on the human being behind the shield of a superhero. The film marks yet another solo outing for a Marvel movie not only fronted by a female character but also directed by a woman — in this case Cate Shortland, who proves she is up to the CGI challenge of it all but also some welcome quieter moments amidst the mayhem. Otherwise what is the point of revisiting this yet again for Johansson, who has kept the nuances of Natasha close to her vest in previous installments; now that she is toplined, we get a shot at understanding just how the kickass Russian spy and assassin could not only fit so smoothly with an American accent into the Avengers, but also go out as she finally did with such empathy and heart.

Actually the pre-credits opening is set back in 1995, when Natasha (played by Ever Anderson) was about 12 and sporting blue hair and a tomboy attitude living with her younger sister Yelena (Violet McGraw), “father” (David Harbour) and “mother” (Rachel Weisz) in Ohio. However, the action starts right away as dad sets them off to the airport and onto a plane landing in Cuba, where in no time both young girls are injected with something, knocked out, and sent on their way. It turns out this “family” was really Russian spies. Harbour is actually Alexei aka Red Guardian, a Russian answer to Captain America but not as famous (a detail that bugs the hell out of him). Weisz is Melina, a veteran of the Red Room, the Russian spy ring that turns out “widows” and was thought long gone but is still run by a vicious man named General Dreykov (Ray Winstone). It is all kind of like The Americans on steroids.

Cut to 20 years later. Natasha is on the run as the baddies are after her and Steve Rogers and her nemesis Dreykov is particularly gunning for her, having blamed her for the death of his daughter. Yelena (scene-stealer Florence Pugh) is now a crackerjack graduate of the Red Room, a girl who takes no prisoners. We are about to witness a sibling reunion like no other in a cleverly choreographed scene where the pair of “sisters” reunite. Past hurts and grievances come boiling to the surface for both, though Yelena handles a lot of it with a wry sense of humor. Scenes between both stars work nicely, with Natasha’s awkward shyness counterpunched by the lively and cynical Yelena. But the real reunion comes later, when in a spectacular prison escape the two girls fly into the gulag and spring dear old dad aka Alexei, as Harbour with a thick Russian accent chews every bit of scenery he can swallow. This leads to Melina’s house and a nifty scene with the foursome’s get-together at the dinner table after 20 years apart gives new meaning to the word dysfunctional. There are a lot of psychological scars in this gang, and clearly Natasha longs for the only true family she has ever known — the Avengers, who have split up for the present time, leaving Natasha with a real feeling of aloneness in the world, something Yelena helps heal even if it isn’t always apparent. There are plenty of twists and turns (literally) as all roads lead back to the Red Room and the master plans of  widowmaker (or what might be called a child trafficking ring in reality) Dreykov, who has his own surprises up his sleeve.  Can’t reveal more. Disney would kill me.

Johansson is again a great presence in the role, showing expert action and acting chops throughout, while Pugh is clearly ready to lead her own franchise after this MCU debut. Weisz is simply such a good actor she can even make some of the more ridiculous dialogue land, and Harbour, tatted to the hilt, is clearly having a blast overplaying every moment of a character designed to think only about himself. For me though ,just having Winstone in this picture lifts it several notches, and he is deliciously fun and scarily authentic as the villain of the piece.

DO NOT leave the theatre before the end credits have completely rolled (Marvel fans know this of course), because there is one final scene involving a major TV star you won’t want to miss. It also clearly offers a clue to where the MCU could be headed next.

Kevin Feige is the producer of Black Widow. Eric Pearson wrote the script from a story by Jac Schaeffer (WandaVision) and Ned Benson.

Check out my video review above with scenes from the movie. The film will be released in theatres and Disney+ Premier Access (about $30) on July 9.

Do you plan to see Black Widow? Let us know what you think.