Continue to Deadline SKIP AD
You will be redirected back to your article in seconds
Skip to main content
April 3, 2021 9:11am 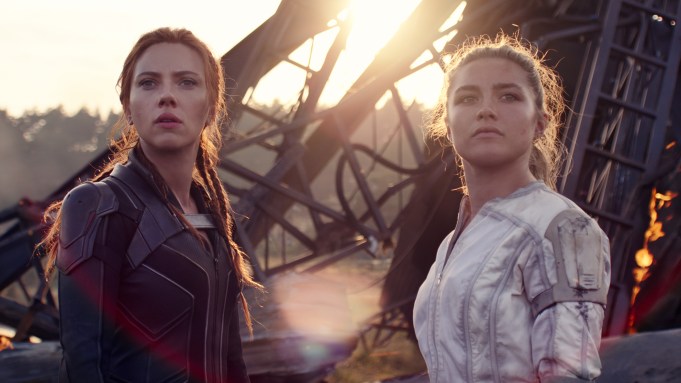 With the box office making a comeback this weekend with Warner Bros./Legendary’s Godzilla vs. Kong, Disney might want to rethink their distribution strategy when it comes to Marvel’s Black Widow on July 9.

After watching this second trailer for the movie which is expected to hit theaters and Disney+’s Premier PVOD service, who would ever want to watch Black Widow at home? I mean, seriously. The pic was clearly built to be seen in a platinum exhibition setting.

Most of the footage here between Scarlett Johansson’s Natasha Romanoff and her character’s sister Yelena Belova (Florence Pugh), we’ve seen, but there’s new voiceover dialogue by Black Widow, which reminds us that she died in Avengers: Endgame and that this movie is a prequel. “I made mistakes choosing between what the world wants you to be and who you are…We have to go back to where it all started…One thing’s for sure, I’m done running from my past,” she says.

There’s also new footage of Black Widow as a kid with multi-color hair. David Harbour’s Red Guardian, Black Widow’s papa, seems like he was a very supportive dad, as we see here. “My girls are the toughest girls in the world!” he says in a flashback scene.

However, something went sideways when she was a kid. There appears to be some flash scene of either Natasha or Yelena getting separated from their parents.

During the press day for Disney+/Marvel’s The Falcon and the Winter Soldier, Anthony Mackie teased that he wanted a cross-over series between Falcon and Black Widow. How that would go down is the question: Either that would be a prequel series to the events of Captain America: Winter Soldier or the MCU would have to bring Natasha back from the dead.

However, if there was a way to connect Black Widow with Falcon and the Winter Soldier, it would come as no surprise to see the female Marvel hero stumbling on a super serum plot in Russia.

Check out the new Black Widow trailer above.