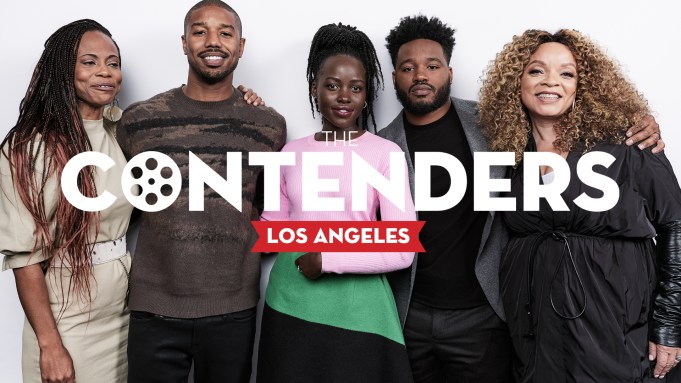 Disney/Marvel’s Black Panther is poised to be 2018’s highest-grossing film at the domestic box office with a tally of $700 million. Since its release in February, the film has been lauded not only for its groundbreaking performance but also for its cultural impact, exposing a portion of the African and African American experience to the mainstream.

The goal, said director and co-writer Ryan Coogler, was “to make to make a universal film. A film that was specific to the African experience, to the black experience, but also a film that could be universally felt by audience members of any heritage.”

Speaking recently in front of a packed theater during Deadline’s annual The Contenders Los Angeles awards-season event, Coogler said he infused themes into his film like family, abandonment, social responsibility and entitlement that “hopefully people could connect with.”

Coogler, joined on the DGA Theater stage by stars Michael B. Jordan and Lupita Nyong’o as well as Black Panther production designer Hannah Beachler and costume designer Ruth E. Carter, touched on his own personal exploration of what it meant to be African.

“When you grow up as a black man in this country, the concept of being connected to the continent is one that is often conflicted, conflicted with a sense of pride but also with a sense of misinformation and sometimes it could be a sense of shame,” he said.

“What we learn through the process of making the film and sharing it with the audience is that is something that everybody has in common. Everybody comes from somewhere. Everybody has a heritage from somewhere and they also have those things associated with it as well.”

To see more of the conversation, check out the video above.