Continue to Deadline SKIP AD
You will be redirected back to your article in seconds
Skip to main content
June 13, 2019 8:32am
3Comments 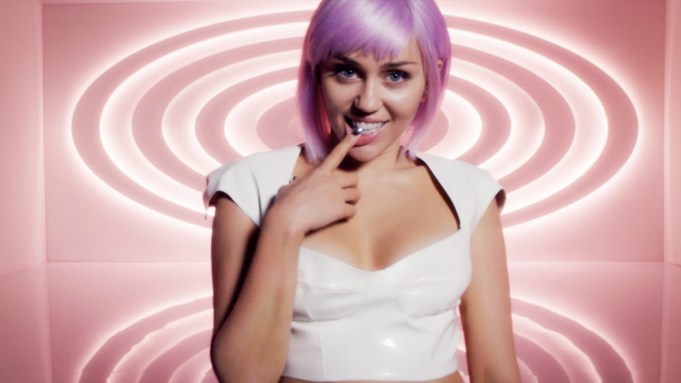 Netflix is releasing Miley Cyrus’ (Ashley O) music video for her new single “Roll On”. Viewers were introduced to the fictional pop star in Black Mirror’s season 5 episode “Rachel, Jack and Ashley Too”. (See the countdown video above which goes live at 9 am).

In the episode, which premiered with the rest of the sci-fi anthology’s fifth season on June 5, a lonely teen (Angourie Rice) becomes obsessed with a robot doll made in the likeness of her favorite pop star, Ashley O. Ashley, meanwhile, is disillusioned with her seemingly perfect life, which is rapidly spinning out of control.

Reflecting on the new song, Ashley O says in a statement Thursday, “It’s really important for people to feel like they’re in control of their own destiny, and that means having the confidence to be who you want to be.” Ashley O’s manager Catherine Ortiz says the song is inspired by Ashley’s own experiences and her perseverance through her career. Ortiz states, “The lyrics to “On a Roll” are so true. Ashley has worked very hard, and now she’s going to get what she deserves.”

The release goes on to say Ashley O’s writing process sets her apart from other artists and performers in the industry. Ashley O says a lot of her music comes to her in her dreams. She states, “They’re kind of there in my mind while I’m sleeping, so when I wake up I have to really quickly write it down because I don’t want it to just disappear.”

It continues with a mini-bio that sounds like it may have been written by Ashley’s O’s aunt Catherine, herself.

“Ashley O began her career at a young age singing and performing. Upon the untimely death of her parents, her aunt, Catherine Ortiz, became her primary caretaker. As Ashley O continued her career, Ortiz would later become a source of confidence for her star niece, and eventually signed on as her manager. The video debut comes hot off the heels of another buzzworthy Ashley O project: Ashley Too, the all-new, intelligent companion doll based on Ashley O’s actual personality.”

“On a Roll” may sound familiar to many. It is actually a reworking of the 1989 Nine Inch Nails hit “Head Like a Hole.” Snippets of the song were heard throughout the Season 5 episode.