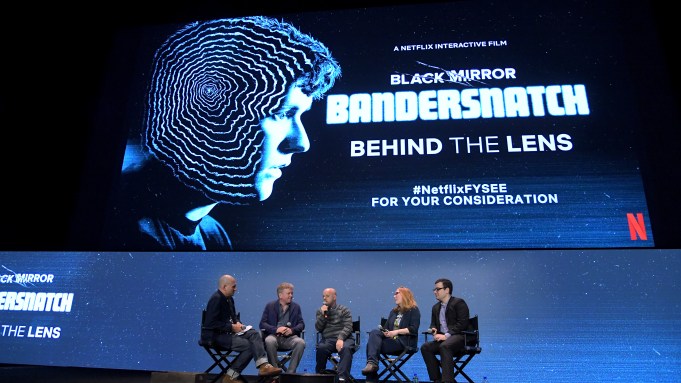 “The fun part of working with someone like Charlie and Annabel is that they have crazy ideas and amazing really complex and amazing ideas,” admitted Netflix’s Carla Engelbrecht of the relationship between the streamer and Black Mirror EPs Charlie Brooker and Annabel Jones, specifically on the interactive feature Bandersnatch.

In fact, the crazy and complex process of putting together the very grown up choose your own adventure-based December 28, 2018 debuting flick was the basis of our recent Behind The Lens panel with the Director of Product Innovation at the Netflix FYSEE HQ on Melrose.

“As we’d been working on kid’s titles previously, there’d be like 15 choices and two or three endings,” Engelbrecht added of the opening salvos of interactive TV, as you can see in the video above. “In the case of what Bandersnatch ultimately became, it was a very complex story, for all of you who’ve played it, it very labyrinthian and turns in on itself,” the exec noted, unveiling the role the development of the proprietary tech of “Branch Manager” played in getting the Fionn Whitehead and William Poulter-led project to completion.

Note the use of the term “play” for the masterfully David Slade helmed project that exultated all the most exploratory and scrutinizing aspects of Black Mirror in a truly new manner and form.

“We all felt it was super successful,” declared Netflix Director of Original Series Andy Weil in front of a packed house, and leaving open the binary code to more such innovation with the Black Mirror team down the road.

Engelbrecht and Weil were joined on the wide-ranging panel by Black Mirror: Bandersnatch producer Russell McLean and director Slade.

Plug into the video above for more of our conversation and check out more of our panels from the Netflix FYSEE ground zero in the days to come.

Speaking of days to come, if you are in that Black Mirror state of mind, the latest installment of the anthology series launches on June 5 on Netflix.