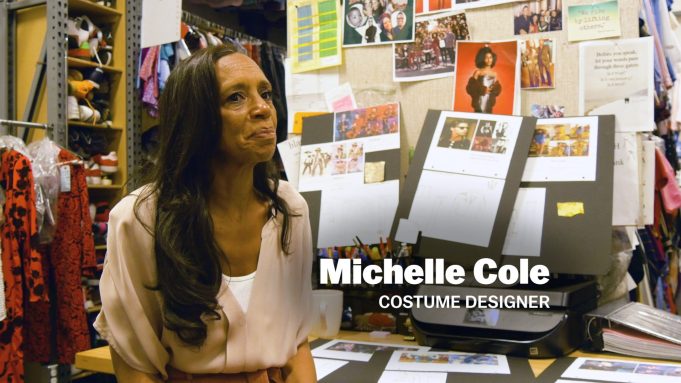 For Michelle Cole, a five-time Emmy nominee known for her work on Black-ish, the dream of a lifetime presented itself at age 14, during a performance of My Fair Lady. “I walked out of the theater and said, ‘Dad, I want to be a costume designer,’” Cole recalls. Setting out to hone her craft, she began taking sewing classes and drawing—and by the time she graduated from college, she was working on a production of the very same musical that inspired her in the first place. To Cole, this seemed like a sign. “I knew I was on track when that happened,” the costume designer reflects.

Beginning her 30-year television career with The Young and the Restless, Cole started working on set and in the stockroom with the determination to work her way to the top. Contributing over the years to the look of such beloved sitcoms as Martin and The Bernie Mac Show, Cole’s big break came in 1990, with Keenan Ivory Wayans’ Emmy-winning sketch comedy show, In Living Color. “It’s such an honor to be on such an iconic show like that, where so many people came out of that ensemble cast—Jim Carrey, and Damon [Wayans] and everyone. We really had an amazing time,” says the costume designer, who worked on over 100 episodes of the show. “It was a really great part of history for all of us. Everything was just bursting out the seams at that point.”

In 2014, Cole found yet another project of major career and personal import in Kenya Barris’ Black-ish, a series defined by the vision and collaborative nature of its creator. Late last month, the costume designer invited Deadline into her Black-ish stockroom to discuss her approach to her craft, and the highlights of working on the beloved ABC sitcom.

Centered on African-American parents, raising their kids in a predominantly white, upper-middle-class neighborhood, Black-ish was a personal project for Barris, so Cole approached her work with this in mind. “We had numerous conversations, because…this was his family,” the Production Value guest explained. “Anthony Anderson was supposed to be Kenya, and Kenya is very well dressed.”

Barris’ knowledge and appreciation of fashion has been a major asset to the show over the course of its run, though he wasn’t the only one who knew his way around a clothing rack. “You have Tracee [Ellis] Ross—come on. I mean, you can’t get better than that. We have so much fun [with] her, and her shoes, and her clothes. She has a lot of input, and Kenya asked me to talk to her a little more because she does know what she likes,” Cole told Deadline. “She does know clothes. She does know fashion.”

When a new script for Black-ish comes in, she explained, “we sit down and talk amongst ourselves [about] how we envision it. Then, we’ll do our own little tear sheets, and mood boards, and things like that.” The boards that Cole creates are informed by extensive photographic research, on the part of the designer and her team. “We’ll pull from everywhere, and just kind of come up with our collage, and most of the time—thank God—we get an A for our boards. We’re right on point, and we come back and high-five each other and we’re like, ‘We did it,’” the costumer says. “Every once in a while we get our notes and have to go back to the drawing board. But most of the time, we’re on our mark.”

In Season 5, Black-ish hit its 100-episode milestone, marking the special occasion with an episode about Prince, titled “Purple Rain,” in which father Andre Johnson teaches his kids about The High Priest of Pop. “When we got back last year, we started really early because we knew [prepping the episode] was going to take some time,” Cole shared. “They had somewhat of a script, so we started to go in and have our meetings with Kenya, our meetings with the writers. This is where I got to use my theater [experience], because everything was big.”

While this was certainly a recent highlight of Cole’s experience on the show, she has also enjoyed working with its young stars, seeing them come of age. Recently, there has been more opportunity than ever to work with these actors on the rise, between Black-ish and its Freeform spin-off Grown-ish, starring 19-year-old actress Yara Shahidi.

For Cole, though, there is simply nothing not to love about designing costumes for a living. Reflecting on Black-ish and the creative path she forged that brought her to this point, the costumer was hit with strong emotion. “I just love it. I love being a part of it,” she said, tearing up. “You get to be creative, and it’s such a bloodline, I guess, for me.”

For a firsthand look at our conversation with Cole, click above.