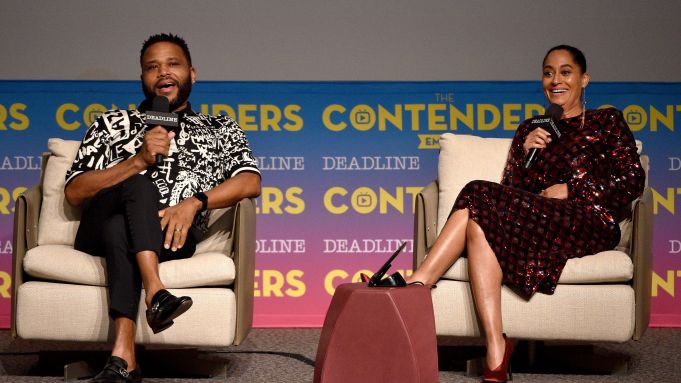 Always pushing the limits of the sitcom form with the introduction of challenging topics, ABC’s Black-ish came out with a bang in the fall with the Hamilton-inspired musical episode “Juneteenth.” Appearing at Deadline’s The Contenders Emmys event last month, stars Anthony Anderson and Tracee Ellis Ross explained the genesis of the episode.

Educating viewers on a day of celebration commemorating the freeing of slaves in 1865 Texas, the holiday episode stemmed from creator Kenya Barris’ re-education on the facts of American history. Schooled by his son one day—in conversation at home—Barris learned the dark truth surrounding Christopher Columbus, the Italian explorer celebrated with his own holiday each fall.

“The genesis was, ‘Why celebrate Columbus Day, when he was such a bad person? A rapist, a murderer, a bunch of other things, who never set foot—literally—on American soil,” Anderson told a packed house at the DGA Theater last month. “Learning his history, this was something that he wanted to speak about. He’s like, ‘Yo, why are we celebrating this when we should be celebrating something in our culture?’ “

For Ross, there was also an “element of attempting to tell a story in a different way”—something she was able to do with a subsequent Season 4 episode centering on Bo Johnson’s postpartum depression.

“I had never seen postpartum unpacked in this way, let alone on a sitcom, and part of what I thought was very interesting about it is it didn’t give any answers,” she said. “But at the core of the story that we’re telling was a husband supporting, and not vilifying, and trying to understand this very real situation that is occurring for many women, in this journey of having a child.”

To Ross, the way the subject was explored was “exemplary of what is at the core of our show”—that being a safe, loving place shared between Dre and Bo, which was diminished in the last four episodes of the season.