Continue to Deadline SKIP AD
You will be redirected back to your article in seconds
Skip to main content
February 5, 2020 3:41pm 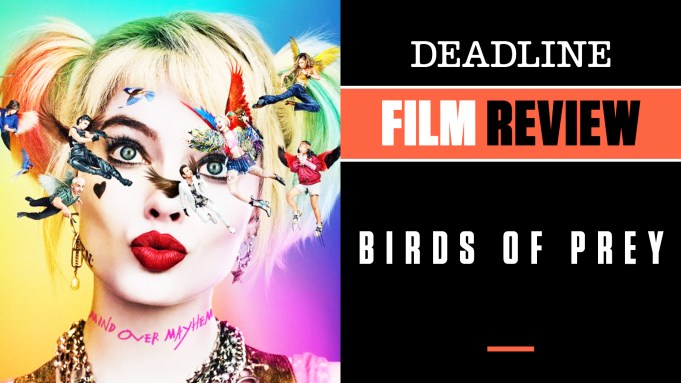 Joker and his origin story have stolen most of the awards-season thunder as far as the DC Comic Book movie world is concerned. But now it is time for his girlfriend to take the spotlight. Or should I say, ex-girlfriend, as we learn that fact very early on in the wildly entertaining Birds of Prey (and the Fantabulous Emancipation of One Harley Quinn), which gives girl power, in front of and behind the screen, its deserved place in the sun.

It took an entire movie for Todd Phillips’ sensational Joker to explain where the character came from. In Birds of Prey, that is taken care of right off the bat in a cleverly animated opening-credits sequence. These women, including director Cathy Yan and writer Christina Hodson, waste no time in getting to the fun stuff, and I have to say this movie is a comic book delight and a total blast for fans from beginning to end. Yes, it has a lot of violent action, to be sure. But it also is perhaps the wittiest movie in the genre I have seen since the first Deadpool.

And it doesn’t try to hide its own DC origins, instead embracing them to the point where it even looks like a knockoff in some ways of the 1960s Batman TV series, in which the words “KAPOW,” “ZAP,” “WHAM.” etc. rolled into the picture. This film does its own take on crazy graphics like that without going that far into camp, and even throws some of the funniest lines on the screen that way, too. There is always something going on here, and for the most part, it really works.

Much of the credit, of course, goes to star and producer Margot Robbie, who revisits her role from Suicide Squad, but this time is the main attraction. She is clearly having fun here (and will actually be playing her again in the upcoming Suicide Squad sequel), and she certainly isn’t afraid to go over the top when necessary, but still makes this oddball character one we find ourselves rooting for despite all her transgressions. And over the top doesn’t even begin to describe what Ewan McGregor does with the key villain, Roman Sionis, aka Black Mask. But he’s clearly relishing the opportunity to play pure evil. The plot zigs and zags, even takes a few flashback detours, but basically, now that Harley is no longer hooked up with Joker and thus no longer feared, she becomes quite the target. However, Roman sees her usefulness if she can bring back the diamond he desperately needs for his devilish plans, a gem that has been pick-pocketed by street urchin Cassandra Cain (Ella Jay Basco).

However, Harley soon finds herself involved with a group of other ladies, the future Birds of Prey as it were, and plans change as they combine for a formidable force to fight Black Mask. This involves bringing Cain into the fold that also includes Helena aka Huntress (Mary Elizabeth Winstead), who is seeking revenge after her entire family is murdered; police detective Montoya (Rosie Perez), who is under-appreciated at the office and knows it; and a singer named Dinah as Black Canary (Jurnee Smollett-Bell), who plays a key role in getting things rolling and engaging Harley in the plans. There are lots of swell action sequences, including a gross one for Roman and gang, who have a talent for “facelifts,” as it were. This is definitely R-rated stuff, but give these women credit for meeting the guys head-on in this game.

Production values are first rate, including Daniel Pemberton’s lively score and a great soundtrack. Producers are Robbie, Sue Kroll, and Bryan Unkeless. Warner Bros releases it Friday. Check out my video review with scenes from the film by clicking the link above.

Do you plan to see Birds of Prey? Let us know what you think.