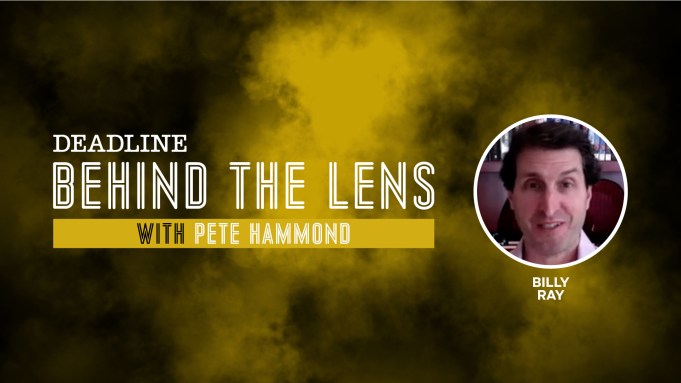 As a writer and director, Billy Ray has always had his pulse on important issues and stories right out of the headlines including his Oscar-nominated screenplay for Captain Phillips, or his American adaptation of State of Play, and the story of the accused Atlanta Olympics bomber Richard Jewell. Add in those that he also directed like Shattered Glass and Breach, and you get the idea of what, partially at least, drives him to take on a new project.

Writing and directing the two-part Showtime movie The Comey Rule, based on former FBI director James Comey’s bestselling memoir, is only the most current example of Ray bringing to life urgent true-life examples of men who come under fire in different ways.

For this week’s edition of my Deadline video series Behind the Lens, I go one-on-one with Ray to see why he would want to take on what inevitably would be a controversial subject, depending on who is watching of course. He talks about that decision, the research that went into it, the direct involvement of Comey himself, any dramatic license that was necessary to tell the whole story over a four-hour running time, the involvement of CBS/Showtime in vetting his script, and the devastating decision they made in initially announcing the show would run after the November election.

That last point was a very low moment for Ray, and he tells how he successfully fought them on it and eventually won when they reversed course and scheduled a pre-election airdate. Ray, from the beginning, felt it was imperative that this project be seen before the presidential election, especially since Donald Trump was one of the key players in it. He also talks about the casting of Jeff Daniels in the title role and why it was so important to get him that they waited for his availability. And he discusses the process of trying to cast Trump, finally convincing Brendan Gleeson to take it on and make it his own. As Ray describes when we begin the interview, he asked Comey if he got Trump right in the show, to which Comey replied that he did, and that talking to Trump was like “getting hit with 10 firehoses all at once.”

In addition to all the details behind The Comey Rule, Ray talks about what drives him in his career choices, and gives insight on  his next project, also for Showtime and awaiting a final green light. He is deep into research in telling the stories and POV of six different people involved directly in the January 6 assault on the U.S. Capitol, and he is working directly with his chosen subjects in telling their side of things. He tells me the inspiration for the approach was a book he read in school, The Bridge of San Luis Rey, in which we hear five different people tell their version of events that happened.

To watch our conversation and go behind the lens with Billy Ray, check out the video above.