Continue to Deadline SKIP AD
You will be redirected back to your article in seconds
Skip to main content
August 26, 2020 1:54pm
3Comments 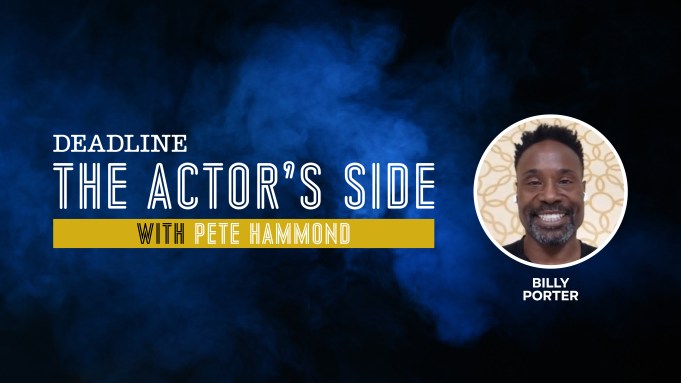 Billy Porter made Emmy history last year when he won the Outstanding Lead Actor in a Drama Series award for his game-changing role as Pray Tell in FX’s Pose. This year he is once again nominated in the category for season two of the series and could be pose-d to make more history . No matter what happens Billy continues to keep “bustin’ doors down” in show business as he tells me in this week’s episode of my Deadline video series The Actor’s Side in which take an all-emcompassing look at his journey in the industry, one that already includes three fourths of an EGOT, as he already has the Emmy, Grammy, and Tony part of the feat locked up. Will an Oscar be in his future?  One place he already made history in that regard is at the Academy Awards, as well as just about every other red carpet  for his unique fashion statements. We talk about that in detail as he explains how he has merged his art and activism into fashion and questions of what masculinity really means. It is all part of who Billy Porter is as he also explains what being at the intersection of his “queerness and blackness” has meant for his career from day one.  We explore it right from the beginning through his breakout in the theatre, as a singer, to his Tony winning work on Broadway  in Kinky Boots  and now all the way to enormous success on television in Pose and beyond. It has been a wild ride, and Porter minces no words about what it all means as he goes forward telling me he is grateful to have lived long enough to see all this change in his lifetime.  There is plenty to take in for both the edited version of our interview which you can watch at the link above, but I highly  recommend watching the complete uncut version which is really special and includes detailed talk on everything including that ground breaking emmy worthy work on Pose. You can check that out below.