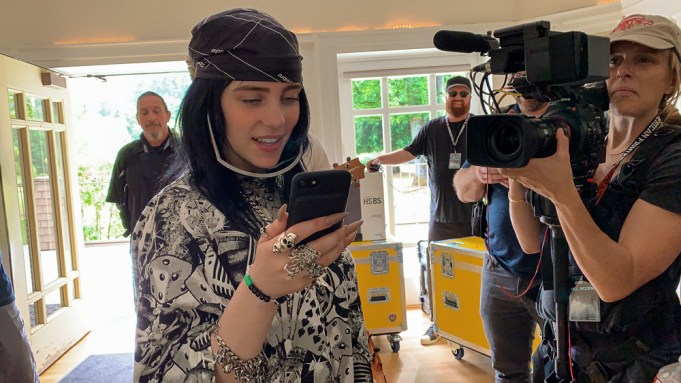 Apple Original Films has released the first trailer for the R.J. Cutler-directed documentary Billie Eilish: The World’s A Little Blurry which takes a look at the meteoric rise of the singer to global stardom. The feature docu will be released in theaters by Neon and globally on Apple TV+ February 26, 2021.

Billie Eilish: The World’s A Little Blurry tells the coming-of-age story of the singer-songwriter and her rise to global superstardom. Cutler, who has helmed docus such as The World According to Dick Cheney and The September Issue, gives audiences a deeply intimate look at the journey of the then 17-year-old as she navigated life as a musician and a teenager living at home with her family. All the while we see her write, record and ultimate release debut album When We All Fall Asleep, Where Do We Go?

Last year, Eilish went on to win multiple Grammys for her debut album including Best New Artist, Album of the Year, Record of the Year, Song of the Year, and Best Pop Vocal Album. Earlier this year, Eilish released the No Time to Die the title theme to the upcoming MGM/Eon James Bond movie.

Watch the trailer for Billie Eilish: The World’s A Little Blurry above.