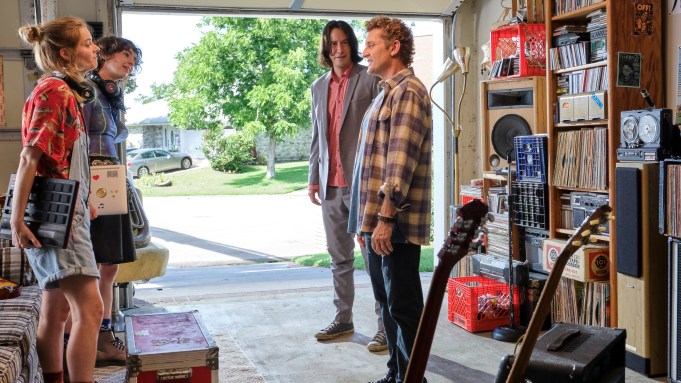 Dude, it’s been totally forever since we saw Keanu Reeves and Alex Winter time-traveling together. Like, three decades or something. Whoa, that’s almost 30 years! Your wait is almost over.

Here is the new trailer for Bill & Ted Face the Music, in which our heroes hit the screen for their first adventure since Bill & Ted’s Bogus Journey in 1991. Check it out above.

Your fogline: The stakes are higher than ever for the time-traveling exploits of William “Bill” S. Preston Esq. (Winter) and Theodore “Ted” Logan (Reeves). The now-middle-age best friends set out on a new adventure to seek the song that will set their world right and bring harmony in the universe. They are helped by their daughters (Samara Weaving and Brigette Lundy-Paine), a new batch of historical figures and a few music legends.

The long-gestating threequel is from Hammerstone Studios and Orion Pictures, which plans to release it on PVOD and ideally in theaters on September 1.

Reeves and Winter will be on hand for a Kevin Smith-moderated Bill & Ted panel Saturday during Comic-Con@Home. They’ll be joined by Weaving, Lundy-Paine, Sadler, Parisot and the screenwriters.