Continue to Deadline SKIP AD
You will be redirected back to your article in seconds
Skip to main content
August 27, 2020 4:31pm 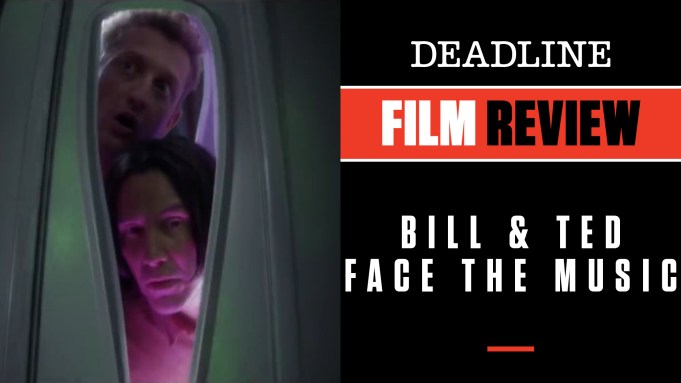 To go all retro on you and quote the little girl in Poltergeist: “They’re baaaaaack.” But have no fear. In this case it is only Bill and Ted via Alex Winter and Keanu Reeves, back on the big (and small) screen three decades after their last outing and now older and wiser. NOT. Older yes. Wiser? Uh, that would be a no.  But that doesn’t mean they aren’t still a lot of fun. Thanks to the original screenwriters Ed Solomon and Chris Matheson, the formula in Bill & Ted Face the Music is pretty much the same and the laugh-out-loud silliness involved with these perpetual time travelers is blessedly intact.

It was 1989’s sleeper smash Bill & Ted’s Excellent Adventure that introduced us to this pair of teenage airheads who trip through time in order to avoid flunking history. Thus they encounter the likes of  Napolean, Joan of Arc and Abraham Lincoln among others in their quest. Two years later the sequel, Bill & Ted’s Bogus Journey, amped up the special effects as the boys showed their musical side in a battle of the bands and traveled to heaven and hell while encountering Albert Einstein, the Grip Reaper and the Easter Bunny among others.

Since then there have been Bill & Ted live-action and animated TV series, video games, action figures, comic books — you name it. And now, improbably 29 years later, a second sequel finds the inseparable pair in midlife crisis married to their princesses (Joanne and Elizabeth), who they plucked from the 1400s if you recall, and stuck in couples therapy to save those relationships. (In this case it is joint couples therapy since you never separate Bill and Ted, of course.)

Storywise a mysterious visitor named Kelly (Kristen Schaal) summons them and sends them back to the Great Leader (Holland Taylor) for an emergency new mission. They must come up with the song that will save the world and reality. This is a mission we thought they had solved at the end of Bogus Journey but never did. At this point in the 91-minute movie they are told they have exactly 77 minutes and 25 seconds to accomplish this, because if they fail to do it by 7:17 p.m. the world, the universe, are goners. This sets them out in their trusty phone booth a couple of years into the future where they figure they will have gotten the prized song by then and can just steal from themselves. Not so easy, and the excellent adventure continues into all sorts of places including their own death beds, battles, and scary visions of what is to come.

Death (the wonderful William Sadler) is back for the shenanigans, and so is a very funny robot (Anthony Carrigan) along with other fan favorites. Their babies, Little Ted and Little Bill, now grown young women in the form of their daughters Billie (Brigette Lundy-Paine) and Thea (Samara Weaving). are on the case too. And of course Joanna (Jayma Mays) and Elizabeth (Errin Hayes) popping in and out of the action after splitting from the office of the therapist (a very deadpan Jillian Bell). Best of all, the musical mission allows them to collect some choice musicians along the way including Jimi Hendrix (DazMann Still), a young Louis Armstrong (Jeremiah Craft) they discover in 1922, and none other than Mozart (Daniel Dorr) himself. The musical contributions among those three as played out here are worth the price of admission and a total gas. They, however, are a tip of the iceberg of notables with screen time here from George Washington to Harriet Tubman, Amelia Earhart and Jesus to name a few.

Ultimately the show belongs to Reeves and Winter, who don’t miss a beat in reprising these beloved doofuses. Winter looks like time has stopped for him, even with all that traveling, but Reeves, at one point displaying a bloated, very non-John Wick-like stomach, looks like he swallowed Ozzy Osbourne.  Do not, repeat, DO NOT miss the scene at the very end of the final credits. It might be the best in the entire film, as well as a preview of what the next Bill & Ted movie will look like in oh, about 2050. Dean Parisot directs it all with zest and style. It’s just stupid fun but well worth the time trip for fans. We missed these guys.

Special thanks to executive producer Steven Soderbergh in getting the band back together. Producers are Scott Kroopf, Alex Lebovici, David Haring, Steve Ponce and Solomon. MGM releases the Orion flick in theaters and VOD on Friday. Check out my video review above with scenes from the film.

Do you plan to see Bill & Ted Face the Music? Let us know what you think.