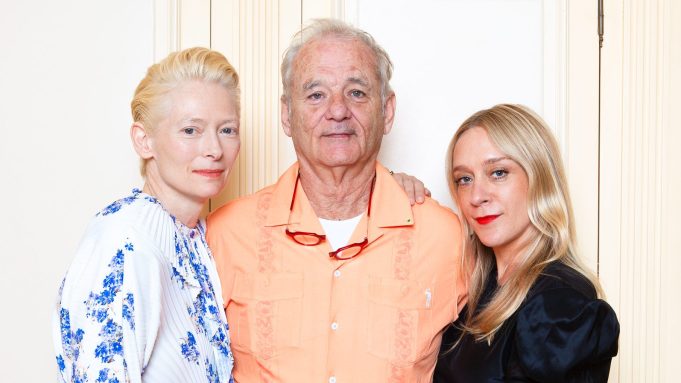 In Focus Features’ Jim Jarmusch Cannes Film Festival opener, The Dead Don’t Die, SNL alum Bill Murray and BlackKklansman actor Adam Driver both play two dead-panned, befuddled, nerdy cops who face the zombie apocalypse with a serene attitude. For example, Driver’s Ronnie Peterson softly says at various points in the film about the monsters who are gobbling up their small town of Centerville, “This isn’t going to end well.”

What’s immediately stands out between Murray and Driver is their comedic shorthand: It’s as though Driver is a lost Murray brother.

“It took me about 20 minutes, I think of the first scene we did,” says Murray about the effortless patter he established with Driver.

“I read the script and said, ‘Oh, my God, this police chief is so damn funny,” said Murray, “I didn’t know what part I was being offered, and I thought,  ‘Oh,  I hope it’s that chief.”

“So then when we started doing the scenes together, and I heard his voice (Adam), it wasn’t clear, it wasn’t like you can work with a clever actor who sees his space. There was none of that. I don’t respect that anyway. What came out of him was this sort of old soul kind-of feeling out of this young man. I realized very quickly, ‘Oh, my God, he’s the funny one, I’m not the funny one.'”

“So then I quickly adapted to it, to be like the straight man. I became Laurel and I love playing straight. It’s really cool. If you can do comedy, it’s much cooler to be straight. Like Teller (of Penn & Teller). Teller is an awesome straight man, and he’s silent too. He’s so cool to watch. He’s such a great straight man,” continues Murray.

“I was taught when you play, you don’t concern yourself with how you’re coming off. All you need to do is make the other person look good, and it just vanishes; the self concern just evaporates instantly,” says Murray about the early comedic instruction he learned from legendary Chicago-based improv teacher Del Close.

Close was an early fixture and director at Second City (and later ImprovOlympic before his death in 1999) whose early ultimately famed pupils included Dan Akyroyd, John and James Belushi, Harold Ramis, Mike Myers among a multitude of others. Close created the long-form improv structure “The Harold” and had a philosophy that when improvisers perform spontaneous comedy, that they keep their characters rooted in reality and play to the top of their intelligence, not becoming bogged down about whether they’d lose the audience in their references. Perform seriously, and the funny will follow.

Previously, Tilda Swinton and Bill Murray starred together in Jarmusch’s Broken Flowers and The Limits of Control. In The Dead Don’t Die, the Oscar-winning actress of Michael Clayton plays the Scottish owner of the local town’s funeral home and knows how to properly use a samurai sword which comes in handy during the zombie invasion. Here Swinton also expounds on Jarmusch’s jazz-like process in directing his actors as well as the film’s theme about a decaying global environment.