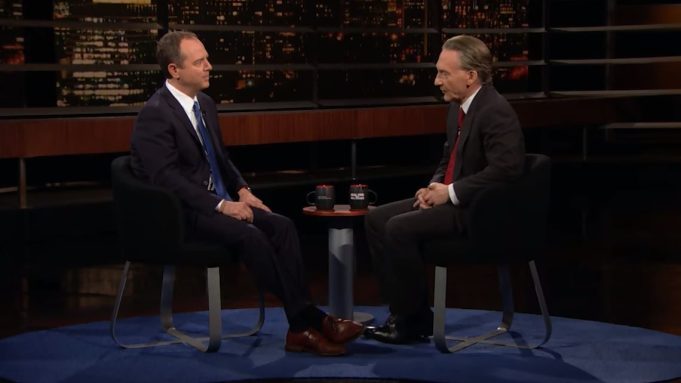 Bill Maher returned from a week off to find the Mueller Report was out, and unsatisfying, “like All the President’s Men meets Al Capone’s vault — what the f*ck?” the avowed Democrat groused during his opening monologue of HBO’s Real Time on Friday.

To help sort it all he had on California Rep. Adam Schiff, the Democratic chairman of the House Intelligence Committee. Schiff, a consistent critic of the Trump Administration, reiterated his belief that even though the report did not directly implicate President Donald Trump, “if we had any doubt before about this President’s fitness for office, there is no doubt remaining: he is unfit for the Presidency.”

But to Maher regulars it was during the end of their interview during the show’s opening segment that a bit of news was made, when Maher noted to Schiff almost as an aside that Schiff had been making more appearances being interviewed on Fox News Channel.

The subject of Democrats avoiding the outlet had been a final “New Rules” rant by Maher only last month, when he lamented the Democratic National Committee’s stance that it would not work with FNC to host a Democratic presidential primary during the 2020 election cycle. “Republicans never shy away from coming on this show, and they come with a smile on their face despite knowing that the only people in the crowd cheering them on are the three campaign aides they brought with them,” Maher said at the time. “The audience is against them and they don’t care — it’s an opportunity to expose people to your side of the story.”

“You have to get inside the bubble,” he finger-wagged at the DNC, telling them to “grow a pair.” “You call yourself the resistance, then fight behind behind enemy lines. … Get out of your echo chamber, and infiltrate theirs.”

Maybe it’s not so coincidentally that since then, Dem candidates beginning with Sen. Bernie Sanders have done Fox News town halls. Sanders clocked nearly 2.6 million viewers as he broke the ice; that’s a record for the format on any network this election cycle. Former Starbucks CEO Howard Schultz drew more than 1.9 million viewers, and future bookings already include Sen. Amy Klobuchar on May 8 and South Bend Mayor Pete Buttigieg on May 17.

Back to Schiff and Maher on Friday.

“I’ll let you go,” Maher told Schiff with a knowing grin as he wrapped the segment, “but I see you’re going on Fox News.”

“Well, I had some good encouragement from someone very close to you,” Schiff said, smiling back.

The exchange was even fist-bump-worthy. Check it out above.