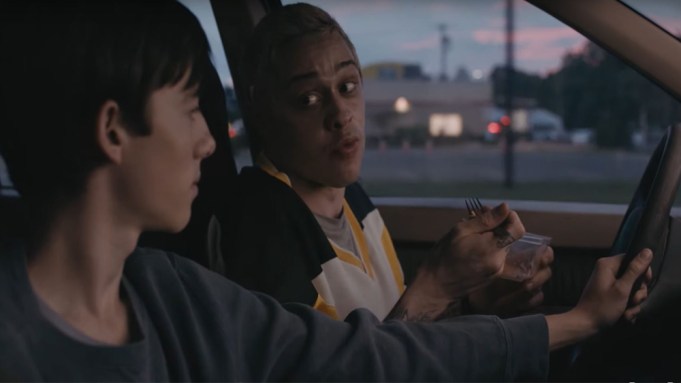 “You’re in high school,” Big Sis says, “you should be making friends your own age.” But the kid replies, “I like hanging out with Zeke.” What could go wrong when Zeke is an unmotivated, pot-smoking, college dropout — and also happens to be Pete Davidson?

Welcome to the first trailer for Big Time Adolescence, the Hulu original film that follows suburban teenager Mo’s coming of age under the destructive guidance of his best pal/his sister’s ex. Check out the video above and the key art below. Note the redband nature of the language, if you’re scoring along at work.

After a house party goes south and draws the cops, Zeke tells Mo: “Kids are supposed to make mistakes. That’s what the whole point of being a kid is.” Yeah, that’s not the only advice this Big Brother wannabe gives the lad. Then there’s the whole “Tongue Daddy” tattoo that gets emblazoned on the boy’s chest.

Jason Orley wrote and the directed Big Time Adolescence, which is a Hulu and LD Entertainment production in association with MXN Entertasinment. It was produced by American High, the production partnership between Jeremy Garelick and Mickey Liddell’s LD Entertainment.