Continue to Deadline SKIP AD
You will be redirected back to your article in seconds
Skip to main content
March 20, 2020 3:55pm 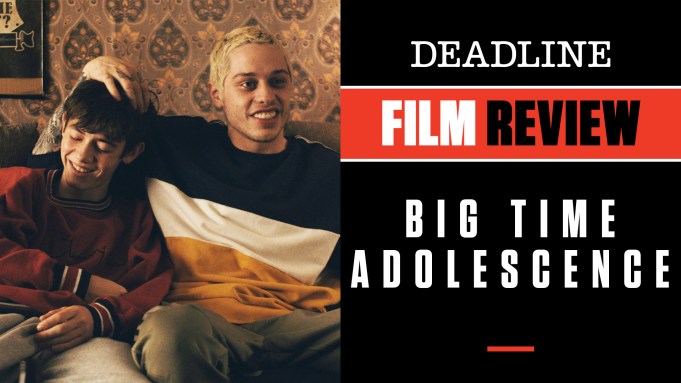 In the new comedy Big Time Adolescence, Saturday Night Live regular Pete Davidson finds a screen vehicle perfectly suited to his quirky talents, and in fact even manages a few scenes that actually bring more than one dimension to a strictly one-dimensional character. Hulu started streaming the film early this week after a theatrical run was cut short when theaters were forced to close due to the coronavirus pandemic. It’s nice escapist fare, and I probably don’t have to tell you that boy do we need it now.

In reality, this amusing and entertaining comedy that debuted a year ago at Sundance is above average for the teen genre, keeping itself grounded in believable characters and making a pretty decent coming-of-age story centered on Mo, who is winningly played by Griffin Gluck, an actor at age 17 who has amassed a veteran’s worth of screen and TV credits that started with his big break opposite Adam Sandler and Jennifer Aniston in 2011’s Just Go For It. Although you might expect a Davidson project to follow in the footsteps of the usual over-the-top high jinks in many (fellow SNL vet) Sandler movies, writer-director Jason Orley shows some welcome restraint in his behind-the-camera debut by never forgetting his characters are human beings, albeit with lots of shortcomings.

It starts with a flashback to when Mo was 10 and tagging along with his older sister and her then-high school boyfriend Zeke (Davidson). Cut to six years later and Mo and Zeke are still the best of friends, long after sis has dumped the dead-end BF, outgrowing his childish antics far earlier than little ‘bro ever will. Zeke is a true slacker, hanging with a kid seven years younger and giving him all the wrong advice and encouragement, from getting him to sell weed to classmates to torpedoing a budding romance by urging Mo to ignore a girl, Sophie (Oona Laurence), after a first date in order to keep her “wanting more.” With free-flowing alcohol, drugs and just about every bad influence, including his own friends and current girlfriend Holly (Sydney Sweeney), Zeke is the kind of guy the basically nice, clean-cut Mo should have stayed far away from, but instead thinks is cool to have as a BFF. It also doesn’t help that Mo has another friend his own age, Jon (Thomas Barbusca), who is just as lethal to be around, and it all goes in bad directions for Mo despite the best efforts of his strict father Reuben (Jon Cryer) to keep him on the straight and narrow and away from Zeke, whom he never liked when he was dating his daughter. Zeke is clearly a guy with no redeeming qualities and a work ethic that is virtually non-existent.

We have seen this kind of setup before where an older guy serves as a bad example for impressionable younger people (think Matthew McConaughey in Dazed and Confused, and even Frank Sinatra in Neil Simon’s Come Blow Your Horn). The role is perfectly tailored for Davidson, who plays it mostly for laughs as his Zeke seems clueless as to the impact of his behavior. He is a hopeless case, and Orley’s script never tries to redeem him, something a lesser-talented filmmaker might be tempted to do. The real growth is from Mo, and Gluck plays him as a basically good kid who gets way in over his head, allowing his own immaturity to get the better of him. A scene near the end between Mo and Zeke (now flipping hamburgers) is beautifully played, with the real truth of their relationship apparent between the lines with no explanation necessary.

Davidson clearly has the more colorful role and shows promise beyond his TV image, but Gluck is the one who brings this film much-needed gravitas and is one to watch. Cryer tones down his own usual comic tendencies for a more typical parental role here, and there is very fine work from Laurence as the smart girl who got away, and Sweeney who also seems to know well the loser with which she is currently hooked up while bonding in her own way with Mo.

Orley, who was a personal assistant to writer-director Nancy Meyers and learned a lot from that experience, invests this story with a sense of real life in between the comical set pieces. His script was actually on the Black List in 2014, and you can see why. It never falls in the trap of so many gross-out teen-oriented comedies, and that’s a relief. Producers are Mickey Liddell, Mason Novick, Jeremy Garelick, Will Phelps, Peter Shilaimon and Glen Trotiner.

Check out my video review above with scenes from the film. Do you plan to see Big Time Adolescence? Let us know what you think.