'This Is Us': How NBC Drama Wrapped The Pearsons' Story After Six Seasons; Dan Fogelman Breaks Down Series Finale; Stars React To End
Read the full story
February 14, 2019 9:45am 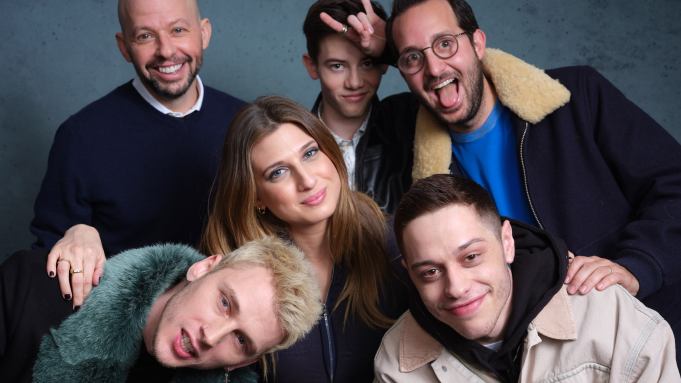 Growing up in Michigan with two older brothers, Big Time Adolescence director Jason Orley “was always surrounded by older guys, their friends that were always giving me bad advice.” As off-base as many of their suggestions were, these young men stuck with Orley, who used his experiences with them as the basis for his feature debut.

An all-too-real coming-of-age story, the film centers on sixteen-year-old Mo (Griffin Gluck), a bright kid with a good family, who makes questionable choices in the company he keeps. His best friend is Zeke (Pete Davidson), a college dropout who is just out for a good time, teaching Mo about the finer things in life—dealing, partying, ghosting and more.

In casting the part of Zeke, Orley immediately gravitated to SNL‘s Davidson. “I was shockingly available,” the comedian and actor deadpanned, sitting down at Deadline’s Sundance Studio with Orley and his co-stars.

Auditioning for the role of Mo, Gluck saw a lot of himself in the character, as a young man growing up with an older sister, who was often swept up into her world. “I was sort of in the same scenario as [Orley] growing up, where I’m constantly surrounded by my sister’s college friends while I’m a sophomore in high school,” he said.

At age 18, Gluck was the only real teenager amongst the film’s principal cast, and it was important for Orley to capture the truth of what growing up is like today. The director had seem plenty of coming-of-age films over the years that “talked down to” their audience, and he didn’t want to be “some old man in a sweater” painting a picture that didn’t connect.

“As the oldest man [in studio], who is actually wearing a sweater,” Jon Cryer attested that the film does resonate—high praise, from the actor who brought us Duckie in John Hughes and Howard Deutch’s seminal youth portrait, Pretty in Pink. “Guys have a thing where they’re fascinated by somebody who breaks the rules a bit,” Cryer noted. “I had a guy like that, except it was in the world of musical theater camp, so it was a little different.”

Known in the music world as Machine Gun Kelly, Colson Baker was also pleased to find a script that was authentic, in relation to the “corny movies” in the coming-of-age canon he saw growing up. “After watching the movie, it’s crazy to me that nobody could play the characters except for the people who were already playing the characters,” he said. “I couldn’t imagine a realer onscreen relationship and off-screen relationship, to produce such an authentic movie.”

To watch our conversation with the Big Time Adolescence team—including Orley, Davidson, Gluck, Baker, Cryer and Emily Arlook—click above.