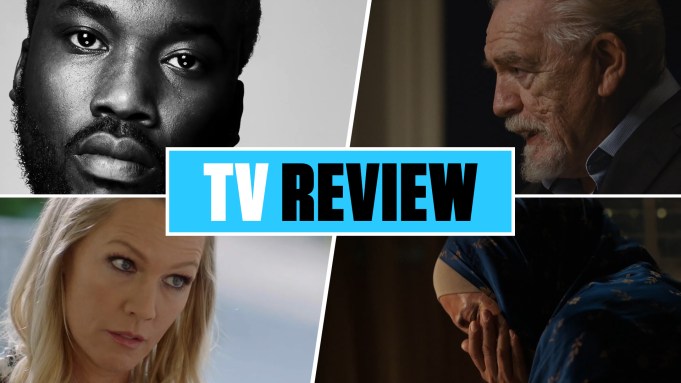 There are some familiar faces, some very rich faces, and two tales torn from harrowing headlines coming to the small screen this week.

With the debut of the mock-drama BH90210 limited series debuting tonight on Fox, the question is what is the show you have to watch? To discover if it is the Beverly Hills 90210 reunion of sorts or another contender, you’ll have to watch my video review above.

Part whacked-out revival and part unintentional homage to the theories of postmodern philosopher Jean Baudrillard, the six-part BH90210 brings incumbent SAG-AFTRA president Gabrielle Carteris, Jennie Garth, Brian Austin Green, Jason Priestley, Tori Spelling, Sharknado’s Ian Ziering and Shannen Doherty together again. Lamenting the passing of co-star Luke Perry in touching moments, the highly stylized, semi-fictionalized versions of the actors stumble and soar in trying to get a fictionalized version of Fox to get behind a lucrative reunion of the 1990-2000 teen sensation series (as they explained onstage today at TCA).

Meek Mill won’t know until later this month if he’ll be retried for a 2007 gun and drug conviction, but Amazon Prime Video’s five-part Free Meek documentary launching August 9 leaves no doubt the deck was stacked against him then and now. Featuring interviews with the likes of Jay-Z, who is an executive producer, the clearly biased up-close-and-personal limited series unveils the rapper’s nightmare journey through the criminal justice system the past decade – and it’s hard to look away at the clear injustice he suffered and could suffer again.

As Shari Redstone prepares her much desired reunion of Viacom and CBS in the empire that her father built, the return of HBO’s Emmy-nominated Succession for a second season on August 12 is perfect timing. Led by Brian Cox and featuring the fantastic Sarah Snook, the self-cannibalizing media mogul clan the Roys are literally ripping their 10-episode Jesse Armstrong created dramedy from the 1% headlines with even more vinegar and power as the ultimate aphrodisiac.

Based on the heartbreaking events that exploded into the 2014 war between Israel and Hamas-ruled Gaza, HBO’s Our Boys is the premium cabler’s latest high-profile Monday night offering. Created by Hagai Levi, Joseph Cedar and Tawfik Abu-Wael, the 10-part limited series is set in the summer five years ago, when three Jewish teenagers are kidnapped and murdered by militants, setting off a spiral of vengeance and destruction in the volatile region.

So, with that, make a bet on what is the show you have to watch and then watch my video review above to see if you picked the right series.