Continue to Deadline SKIP AD
You will be redirected back to your article in seconds
Skip to main content
May 8, 2019 12:08pm 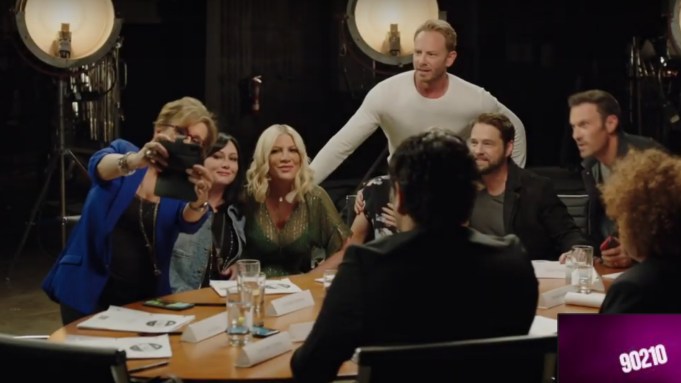 The new 90210 takes the concept of a series reboot to a whole new meta-level. When the cast gets back together, it will come with a big twist: The seven former teen idols will be playing heightened versions of themselves in the new serialized drama – with a healthy dose of irreverence – that is inspired by their real lives and relationships with one another.

Having gone their separate ways since the original series ended 19 years ago, the cast reunites when one of them suggests it’s time to get a Beverly Hills, 90210 reboot up and running. But getting it going might make for an even more delicious soap than the reboot itself. What will happen when first loves, old romances, friends and frenemies come back together, as this iconic cast – whom millions watched grow up together – attempts to continue from where they left off?

Beverly Hills, 90210 premiered on Fox on October 4, 1990, and became an instant pop culture sensation and one of the most popular programs in the network’s history. Centered on the tony Los Angeles community identified in its title, the show aired for 10 seasons, during which it documented the trials and tribulations of a group of friends from high school to college and into early adulthood as they navigate myriad coming-of-age dramas and complex rivalries.

Luke Perry, who played Dylan McKay on the original series, died in March.