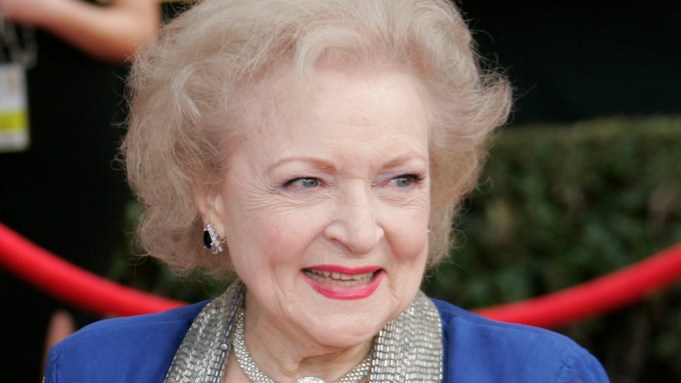 What can you say about Betty White that isn’t already being said around the world today? Her death at age 99 was announced on New Year’s Eve, just a couple of weeks before her 100th birthday. It’s somehow hard to believe she’s gone, even at that ripe old age. She’s always been with us.

Just this morning, GMA did a segment on Betty and her upcoming birthday. Less than a week ago I unwrapped a Christmas present of Ray Richmond’s gorgeous new book on White, 100 Remarkable Moments in an Extraordinary Life. I haven’t even put it on the shelf yet. And only this month Sandra Bullock heaped praise on her The Proposal co-star when I brought up that movie during a taping for Deadline’s The Actor’s Side. Plus I just got today’s mail and there was the new People Magazine with Betty on the cover and the headline “Betty White Turns 100!”

Betty White virtually is the history of television, so much so that everyone seems to have a favorite memory or moment in some way. I actually had two — many, many years apart, but oddly connected.

The first came when I was selected as a Television Academy student writing intern and placed for a summer at MTM Enterprises at CBS Studio Center in the San Fernando Valley. I got free rein of the place for several weeks during the production of The Bob Newhart Show and The Mary Tyler Moore Show. Basically I would get to see all aspects of those weekly productions, and I have to say it was a dream opportunity as a young guy who wanted desperately to be in this business.

I vividly remember sitting in the audience bleachers and watching MTM guest star Betty White playing a character they had just written called Sue Ann Nivens, a sex-obsessed host of a local cooking show. She was on her kitchen set going through a scene. No cameras were present as this was early in the week and she was just rehearsing the scene as they did an initial run-through.

Only one other person was sitting in those bleachers with me, and that happened to be Allen Ludden, the veteran game show host and beloved husband of White (he died in 1981). Later, I worked up the nerve and talked to him a bit, remarking that she was so good in this scene, the character already so defined, that I thought they should have her back more often. He told me they were already in those discussions.

It was a no-brainer. She was soon to become a regular after the episode titled “The Lars Affair” aired to open the season in September.

Cut to some decades later in 2008 and I am now honored to have been asked by the Television Academy to host an instantly sold-out event honoring Betty White on her 60th anniversary in show business. It turned out to be an amazing evening, produced by the way by my good friend and another TV veteran, Rocci Chatfield, who died at age 93 in 2019.

Looking back on it now, I was able to bear witness to a unique historical moment, as it also represented the final complete reunion of the entire living cast of The Mary Tyler Moore Show. They all came out for Betty, including Mary herself, Valerie Harper, Georgia Engel, Cloris Leachman, Ed Asner and Gavin MacLeod.

I even pulled out my copy of that first Sue Ann script and showed it onstage to Betty who, as anyone will tell you, is exactly as nice as she appeared to be in thousands of TV appearances.

Ironically she died on the last day of 2021, the same bummer of a year in which we also lost Ed, Gavin and Cloris. So sad for us, but we can take heart that somewhere they are all back together again with Mary, Georgia and now Betty (who was the last of that core cast) just as they were that night 13 years ago. Hopefully Ted is with them too.

Check out a video clip by clicking the photo at the top of this post to see a special TV Academy memory of that evening as Mary explains just how Betty came to be cast in the series. The entire event is also available on You Tube through the TV Academy’s website. Just search “Betty White 60th Anniversary.”

Rest in peace Betty White. Your life was golden.