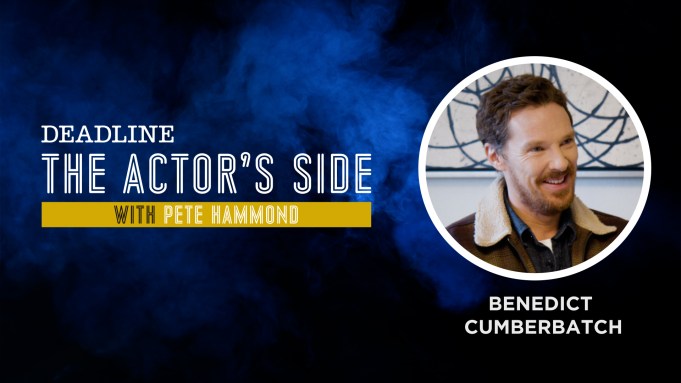 Welcome back to a new Oscar season full of interviews for my Deadline video series The Actor’s Side. After nearly two years of producing this series virtually, which enabled us to go to all corners of the globe for scintillating chats with actors, it is nice — variants be damned — to be back doing these one on one in-person.

We kick it all off today with Benedict Cumberbatch, who no doubt is having a hell of a year. He is onscreen this fall with Netflix’s The Power of the Dog,  Amazon’s The Electrical Life of Louis Wain and actually a third film earlier this year with the acclaimed and fascinating The Courier. Throw in his return as Doctor Strange in this month’s anticipated Spider-Man: No Way Home and you can see this celebrated British star has quite the full plate.

For Louis Wain and Courier, Cumberbatch played real-life people, and he talks about the challenges of doing that, something he has done frequently in his career. But in Jane Campion’s Power of the Dog he is playing the fictional Phil Burbank, an imposing and complex cowboy in the 1925 Montana-set Western drama where his world is on the verge of change. It is a complicated story based on the 1967 Thomas Savage novel and has taken a long route to get to the screen (Paul Newman was initially interested in the ’60s, and you can see echoes of Hud in the somewhat mean and difficult Phil Burbank).

Cumberbatch, a Best Actor nominee for The Imitation Game, is getting heavy Oscar buzz again for this role, understandably. Critics have been drawn to praising it since the film’s debut at Venice, where Campion took a prize.

We also talk about what it was like working with no less than 40 cats in one scene in Louis Wain, as well as all the cattle and horses in Power of the Dog, a movie where he is so down and dirty he purposely didn’t shower for a week at a time while making it.

We start, however, by my asking what it is like to have a legendary legion of fans following his every move — the “cumberbitches” as many of them are known.

To watch our conversation click on the video above, and come back each Wednesday this season for a new edition of The Actor’s Side.